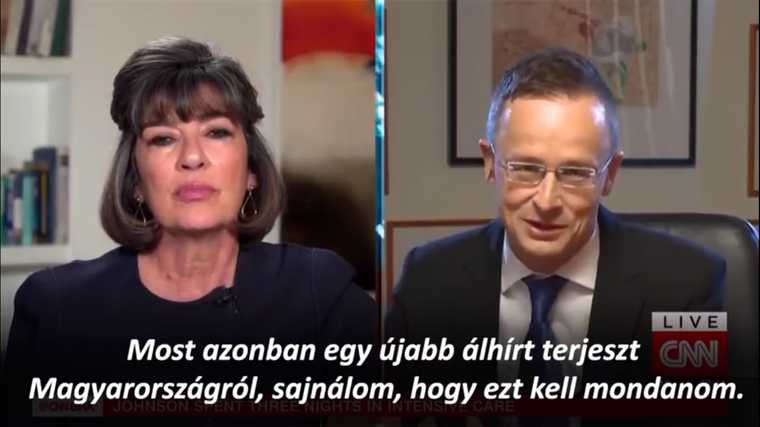 Hungary has faced a campaign of criticism from leftist and centrist politicians in Europe and a number of media outlets for its decision to declare state of emergency so it could better handle the pandemic.

The government sought authorisation for rule by decree indefinitely and the parliament approved that, CNN anchor added. Ms Amanpour asked Szijjarto what did the government need these powers for, what measures to control the pandemic was it unable to have given its massive parliamentary majority. The foreign minister replied that there were many fake news and lies spreading about Hungary regarding the new law. Many of these emphasize that there is no time limit in the law. “This is not entirely true given the fact that the law says it is the parliament itself which can conclude the state of danger. I cannot imagine, to be honest, a more democratic solution for that than giving this right to the parliament itself which has the democratic authorisation from the people, Szijjarto replied.

The FM pointed out that three other EU member states – Poland, Malta and Croatia – have applied a similar kind of solution. “And there are other countries, like Estonia, Italy, Slovakia and Slovenia where the prolongation of such a situation can be based exclusively on the decision of the government, without having the approval of the parliament. What I totally reject is double standards. Why Hungary again?” the minister added.

One of the fake news is that “the government has an uncontrolled and an unlimited possibility to make decrees which is not true,” Mr Szijjarto stated. “The law says very clearly that we can only make decrees in accordance with protecting the country, the people and the economy from the challenges related to the virus.”

“The rights which have now been given to the Hungarian prime minister and the government by the parliament are much narrower than for example the rights given to the president of France under normal circumstances. So portraying this situation as if it was a threat to democracy is simply unfair,” he believed.

“This week we have submitted sixteen draft laws to the parliament, totally independent from the epidemic situation. You have to separate things into two parts. First, the measures regarding the fight against the virus. There, we have the right to make decrees as many other countries decided to do so, because their speed matters. On the other hand, when it comes to laws which have nothing to do with the virus situation, they go in the normal schedule in the parliament,” the minister emphasized.

Weekly corona report: Number of new cases is up by 37.6 percent

Marjan Dodovski, the man who saved lake Dojran from being dried out, has died