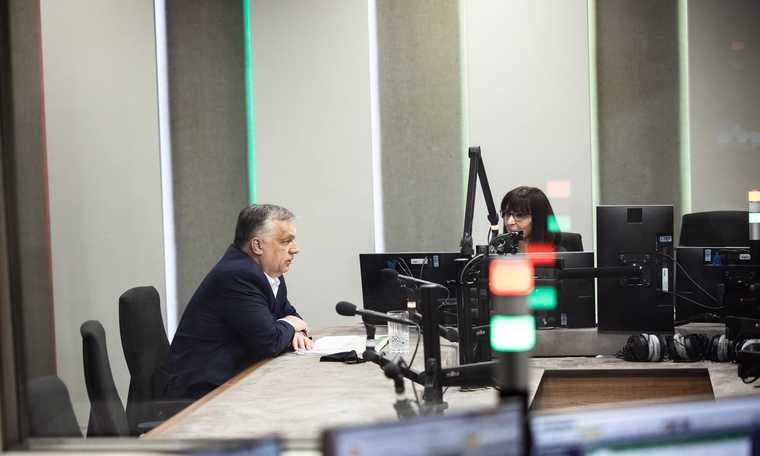 The Hungarian political left cannot overcome its hunger for power and is behaving in a way that is unparalleled anywhere else in Europe, Hungarian Prime Minister Viktor Orban said in a MR1 public radio interview referring to the anti-vaccination rhetoric of opposition leftist parties. As Hungary begins to lead Europe in terms of vaccinations, due to its sourcing of vaccines from various suppliers, the left began sowing doubt in the efficacy of vaccines.

We have to work now, we’ll leave the analysing and philosophising for later, the Hungarian Prime Minister remarked on the anti-vaccination rhetoric of the left-wing opposition. He added that what the Hungarian left is doing here can be experienced nowhere else in Europe.

Viktor Orban emphasized that the defence in response to the crisis is currently not being managed by a political government but by a specifically tasked operative board. He added that he had experienced some insane things on the part of the opposition, referred back to the left’s lust for power and their analysts advising a greater exploitation of mourners’ grief for political gain. Nevertheless, he stressed that now is the time to concentrate our efforts on defence and not on dealing with the criminal sanctioning of those who spread vaccine scepticism, the V4 news agency reported.

It is important that well-meaning people come together and help each other out of this epidemic, the Hungarian Prime Minister declared.

The Hungarian prime minister also talked about the reason behind the anti-vaccination campaign: should Hungary succeed in implementing the vaccination plan in six weeks, the country will be among the first in the world to emerge from the crisis.

At the same time, we also have to counter the profit-hungriness of pharmaceutical companies, which are competing with each other and are trying to raise doubts regarding competitors’ vaccines. Hungary’s governance is united, which is a major advantage in managing the epidemic, the premier stressed.

Although many, including foreign politicians, criticise Hungary’s epidemic management, Hungary boasts the highest number of vaccinated people in Europe after Malta, PM Orban highlighted. He added that the next six weeks will be crucial as the number of people vaccinated can be doubled. The country is now very close to the target of having administered a jab to 50 per cent of those who can be vaccinated, implying that the number of people who are protected will be higher than the number of those without protection, he explained.

Some people got the idea that they would not have to receive the jab when the inoculation of the population reaches 60 to 70 per cent. This is a false idea, the premier stressed, pointing out no one should try to avoid getting vaccinated. It is everyone’s individual responsibility and individual protection, no one can escape the disease, Viktor Orban underlined.

Speaking about restarting the economy, PM Orban said that there are ongoing consultations with the representatives of sectors in trouble. He called the reopening of terraces a symbolic move, by which we can get a part of our old life back.

He highlighted that in 2021-22, 5000 billion Hungarian forints (nearly 14 billion euros) will be spent on restarting the economy. PM Orban said he can see not only hope but also a chance, having already looked at next year’s draft budget, being prepared by Finance Minister Mihaly Varga. Based on the draft, there is a chance to create even more jobs than before, he stated.

Mickoski: Zaev opened the Pandora’s box, the negotiating positions of the country are permanently damaged

We have absolutely no information from the authorities about what is happening at the moment, whether the negotiations are ongoing, how those negotiations are being conducted and so on. The only information we have is what is publicly available, or official statements of EU diplomats and the people who...
Macedonia 18.05.21 | 18:45

Kyuchyuk: It will be very bad if Macedonia and Albania are decoupled

Why is the government silent, and allowed toxic substances dangerous for people’s health to enter the country as fuel oil?!

Medziti: Grubi and Osmani should not be part of the Government

Ahmeti – Galloway: Relations in the coalition are stable

Pendarovski receives Covid-19 vaccine in Kumanovo: Vaccines are the same in all cities

Number of patients hospitalized with Covid drops under 500