US stock market speculator George Soros prefers not to leave the outcome of the US presidential race on 3 November to chance. During this year’s campaign Soros spent over three times as much to overthrow Trump as he did in 2016. The international V4 News Agency has mapped the route of Soros’s anti-Trump donations.

US stock market speculator George Soros has been holding a grudge against US President Donald Trump for a while now. In 2017, the 90-year-old subverter described Trump as a “would-be dictator”, saying it is only the American Constitution that prevents him from becoming one. Soros has grown obsessed with the idea of bringing down Trump and his hatred towards the president seems to have impaired his capacity of sound judgement. The fact that he demanded the removal of ultraliberal Facebook leaders from their posts and even accused Mark Zuckerberg of helping the president appear to corroborate that.

Since Soros cannot influence the outcome of the US presidential race as a politician, he uses his money to manipulate. In the run-up to the 2016 elections that ended with Hillary Clinton’s demise, he spent over 25 million dollars on supporting Democratic candidates, an amount he tripled this year.

US election laws allow the establishment of so-called political action committees (PAC), which coordinate the collection of donations offered for campaign purposes. The Federal Election Campaign Act amended in 1974 set limits on material contributions for candidates or political parties made by individuals, but PACs are allowed to raise, pool and distribute campaign funds.

Knowing this, Soros did not hesitate to set up a political action committee called Democracy PAC and poured plenty of money into it.

According to the database of the US Federal Election Commission, the Democracy PAC earned 77.7 million dollars in revenue and out of this, it has so far allocated 73.3 million dollars to various organisations. Expenditures include grants to candidates, bank charges and legal counselling.

According to the Federal Election Commission, the Senate Majority PAC (SMP) has gained the most. The committee can be linked to influential Democratic politicians such as Senate minority leader Chuck Schumer. SMP received 8.5 million dollars from Democracy PAC.

By the way, Senator Chuck Schumer has maintained a friendly relationship with the Soros clan. He has had personal meetings with Alexander Soros, the son of the stock market speculator, on a number of occasions. 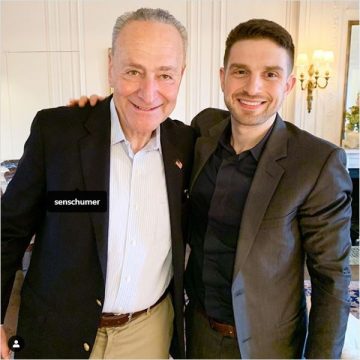 This map shows the organisations that have benefitted from Democracy PAC grants. Many are returning guests in the Soros empire.

Planned Parenthood Votes – the political wing of the organisation that runs a network of abortion clinics – announced as early as this summer that they would be endorsing Joe Biden.

Donald Trump is putting our lives at risk every single day he remains in office.

In this election, we have a clear choice: four more disastrous, damaging years or an opportunity for real change and leadership.

Planned Parenthood, however, does not only receive funding from the Democracy PAC, but also from Soros’s Open Society Foundations (OSF). According to the foundation’s website, the Planned Parenthood Action Fund received 1 million dollars in 2018 alone.

The Sixteen Thirty Fund is not only included on the pay-out list of Democracy PAC. According to OSF’s website, they received 4.2 million dollars from Soros’s foundation in 2018.

Tides Advocacy, one of George Soros’s most heavily funded organisations, also appears in the Federal Electoral Commission’s database. According to the OSF, they collected more than 1.7 million dollars in funding from the Soros network in 2018.

An organisation called Community Change also appears on the OSF website. It received nearly 1.5 million dollars in 2016, along with Color Of Change, which was granted 350,000 dollars in 2018.

Several organisations on the Democracy PAC pay-out list, including the Black PAC and the Somos PAC, work to mobilise voters in certain states. The former focuses on increasing black voter participation, while the latter targets Latino voters.

Other organisations are tasked with running smear campaigns against Donald Trump through videos and commercials.

Priorities USA Action, for example, used the coronavirus pandemic to attack the president, producing videos that suggested Joe Biden would have handled the situation better.

Another organisation enjoying the support of Soros’s PAC is a radical abortion party called the NARAL Freedom Fund. The women in the video claim that the president and his allies “put their ideology over science” and that the current administration uses the coronavirus pandemic to restrict abortion access.

V4: Hungary caught in the crossfire of US domestic political debates