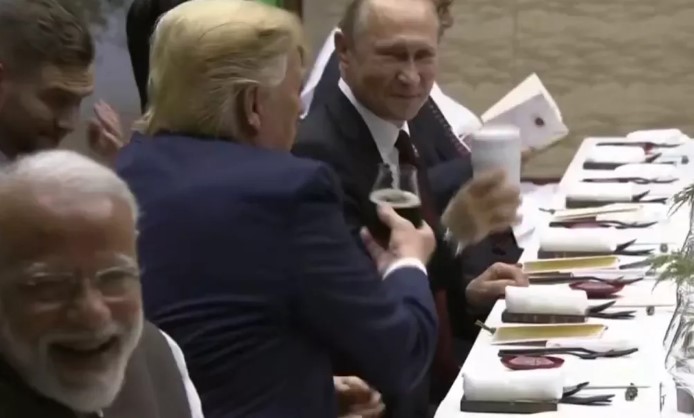 The appearance of Russian President Vladimir Putin with his mug at the gala dinner with the participants of the G20 summit has provoked a lot of discussion not only in social networks but also in the Western press.

If initially talked about fear of the Russian leader to be poisoned, which found support among supporters of the conspiracy theory, then later the bloggers noted the strange shape of circles, that Putin drank. In particular, earlier the Russian President was seen with a similar mug on one of its straight lines.

At the bottom of the vessel there is a slight hole, but on the whole there is something like labels in the form of the Russian coat of arms. Some users noted that while the use of “drink” Putin kept a hand on the place where was the sticker. This has caused speculation that the label was the button, and the circle — inhaler. So it is not known.

What do you think was inside his mug?

In the Russian press suggested that the Russian President drank tea with honey, because at the summit was cold.

It is worth noting that rumors about Putin’s diseases go long. Including information about cancer disease of the Russian President.

Supporters of the same conspiracy theories have been actively discussing the version that Putin himself is long dead, and Russia is ruled by his counterparts. Confirmation of this version can be change the shape of the face of Putin, and also irregular growth of the Russian President.

However, the main researcher of Putinism — the sociologist Igor Eidman — believes that the rumors about the twins Putin just fake.