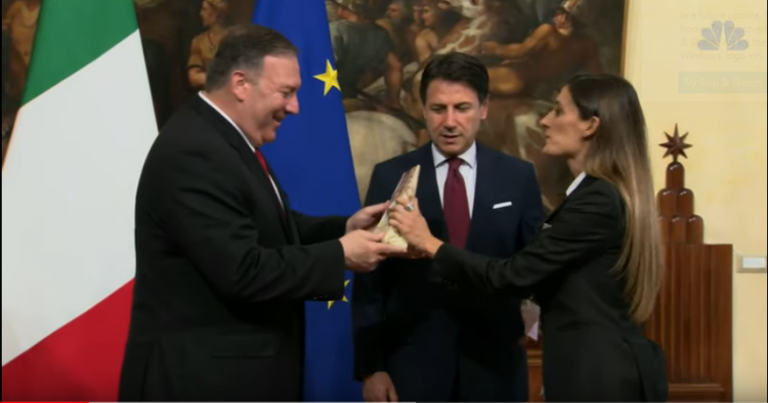 Secretary of State Mike Pompeo was presented with a bizarre gift during a press conference with the Italian Prime Minister on Tuesday, when a protester stormed the stage wielding a block of cheese that she urged must be delivered to Donald Trump, Daily Mail reports.

Pompeo had been posing with Italian Prime Minister Giuseppe Conte for what at first appeared to be a typical photo opportunity in Rome on Tuesday, when a woman approached the two officials armed with a lump of Parmigiano Reggiano and a message for Donald Trump.

‘I have a present for you — an Italian present. The prime minister knows what I am talking about. This is Parmigiano-Reggiano, and this is what we make best in Italy,’ the woman, later identified to be TV personality, Alice Martinelli, was heard telling Pompeo.

Pompeo awkwardly accepted the pound and a half of authentic Italian cheese, offering her a bemused smile in return as she asks for his ‘help’.

‘Take it to Mr. Trump, please, and tell [him] that we make it with our hearts, please,’ she called out as she was ushered away by security on Conte’s orders.

Though reaction to the stunt consisted mostly of confusion and amusement at Pompeo’s expense online, Martinelli, a journalist with Italy’s satirical ‘Le Iene’ show, later explained to the Washington Post the real message behind her actions.

‘My gesture was about tariffs,’ Martinelli told the paper, making reference to the crippling sanctions President Trump is touting to impose on the European country, which would include popular exports such as wine, olive oil, and cheese.

Conte: North Macedonia should be allowed to move forward to Europe