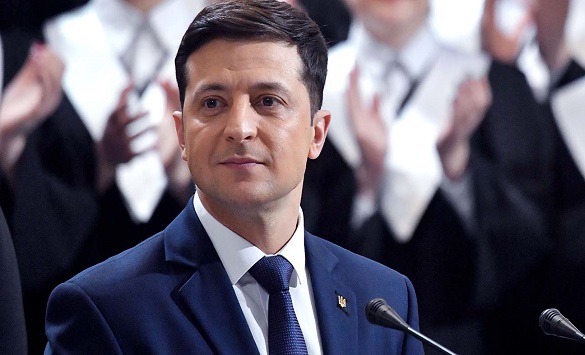 Ukrainian comic actor, showman and presidential candidate Volodymyr Zelensky takes part in the shooting of the television series "Servant of the People" where he plays the role of the President of Ukraine, in Kiev on March 6, 2019. - Anger with the political elite is partly behind the rise of Volodymyr Zelensky, a TV actor with no political experience who is the frontrunner in the upcoming presidential vote. Zelensky is polling at 25 percent, ahead of Poroshenko on 17 percent and former prime minister Yulia Tymoshenko on 16 percent as of March 4, 2019. (Photo by Sergei SUPINSKY / AFP) (Photo credit should read SERGEI SUPINSKY/AFP/Getty Images)

Ukrainian President Vladimir Zelensky signed a decree on Wednesday lifting a number of previous bans on visiting the Chernobyl exclusion zone around the site of the 1986 Chernobyl nuclear reactor disaster and creating a “green corridor” for tourists, TASS reports.

“We should show Chernobyl to the world: scientists, environmental specialists, historians and tourists. Today I signed a decree, which will launch the process of turning the exclusion zone into one of new Ukraine’s growth points. First of all, we will create a “green corridor” for tourists and remove preconditions for corruption,” Zelensky said, stressing that “there would be no bans.”

According to Zelensky, now Chernobyl, which has surprisingly become a popular tourist destination, is a major source of corruption. “Unfortunately, the exclusion zone has so far remained a symbol of corruption: security forces collect bribes from tourists, illegally ship metal and take advantage of natural resources. We will soon put an end to this,” he emphasized.

Zelensky vowed that Chernobyl would soon become a scientific and tourist site, which is poised to be “a symbol of new Ukraine’s freedom — without corruption and notorious bans, but with investments and a future.”