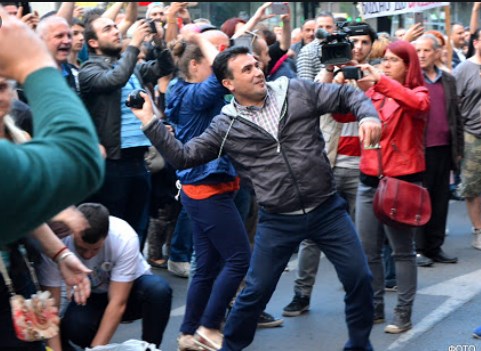 SDSM party leader Zoran Zaev sought to lay the blame for the spike in the coronavirus cases on the interim Interior Minister Nake Culev, the only high level opposition appointee in the Government.

Zaev blamed Culev for not using the police aggressively to disperse the iftar dinners during the month of Ramadan, a practice that would have been unheard of and would likely lead to violence. Macedonia is now facing a spike in new cases and deaths that is likely linked to the disregard for the social distancing and curfew orders in the Muslim community for the past month.

This is the direct result of the lack of work, the populism and partisan profiteering on the part of the technical Interior Minister Nake Culev and his boss Hristijan Mickoski who acted irresponsibly with cheap and populist statements that the citizens don’t have to be fined when they disregard the restrictions. Culev directly spurred disrespect for the measures and the public witnesses the numerous massive violations of the curfew and the orders that protective equipment is worn, Zaev said.

Culev has limited control over the Ministry, which is rife with SDSM appointees, and had little influence over the measures that were being put in place, but it was noticeable that SDSM is hoping for a confrontation between the police and the Albanian Muslim community during Ramadan. Zaev’s SDSM party is campaigning heavily among ethnic Albanians, as its support among ethnic Macedonians evaporates. VMRO on the other hand, has little influence over the Albanian community. As a result of the 2001 war the police overall has little influence over many Albanian majority areas which are considered no-go zones for police officers. During the curfew there was even one near-riot situation, in the Skopje area of Cento/Singelic, when officers arrested several ethnic Albanian SDSM party activists. This prompted a mass protest and local SDSM officials had the men released. This was also a warning, of sorts, that the police will not be tolerated if it begins systematically arresting violators in the Albanian majority parts of the country.

Zaev again called on Culev to resign today, although there is no sitting Parliament to accept the resignation and appoint a new Interior Minister. Zaev was hoping that he will create a sense of normalcy in the country followed by quick and low turnout elections in June. But the Ramadan spike seems set to disturb his plans.