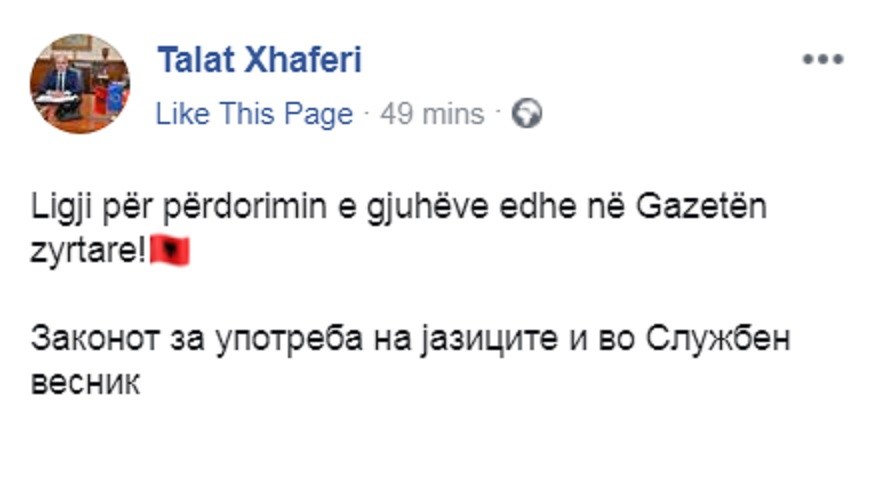 The law on the use of languages, which expands the official use of the Albanian language across the whole of Macedonia, was published in the Official Gazette yesterday, despite not being signed by President Gjorge Ivanov. Speaker Talat Xhaferi said that he has signed the law in a social media post, in which he used the Albanian flag to celebrate his decision. President Ivanov said that the law is clearly unconstitutional, as the Constitution determines that minority languages are used officially only where that minority is over 20 percent of the population, nto across the entire country and VMRO-DPMNE condemned Xhaferi’s decision saying it is a criminal act to publish a law not signed by the President.

Xhaferi’s move comes on the same day when the constitutional amendments that rename Macedonia into North Macedonia were published in the Gazette, also without the President’s signature.

The law introduces an obligation to use the Albanian language in all public institutions, with fines provided for the institution and its employees who don’t use it. This article was strongly criticizes as the law was being negotiated by the ruling SDSM – DUI coalition, given that most public employees don’t speak Albanian.

It also provides that the currency, military uniforms, stamps and many official documents will be bilingual. All public institutions web sites will have to have an Albanian version. A huge new translation body will have to be put in place to implement the law which goes far beyond what was agreed at the 2001 Ohrid peace treaty.

We warn the director of the Official Gazette Martin Kostovski that publishing a law in the Gazette without the signature of the President is a criminal act for which there are is statute of limitations. All involved in this brutal violation of the laws will be held responsibile. SDSM is again raping the democracy and the rule of law in Macedonia. The SDSM led Government is forcefully turning the Repubilc of Macedonia into a bilingual state, VMRO-DPMNE said in its press release.

Prime Minister Zoran Zaev is off skiing in Germany and the Government has been largely silent on the issue, except for victorious comments from its ethnic Albanian members.