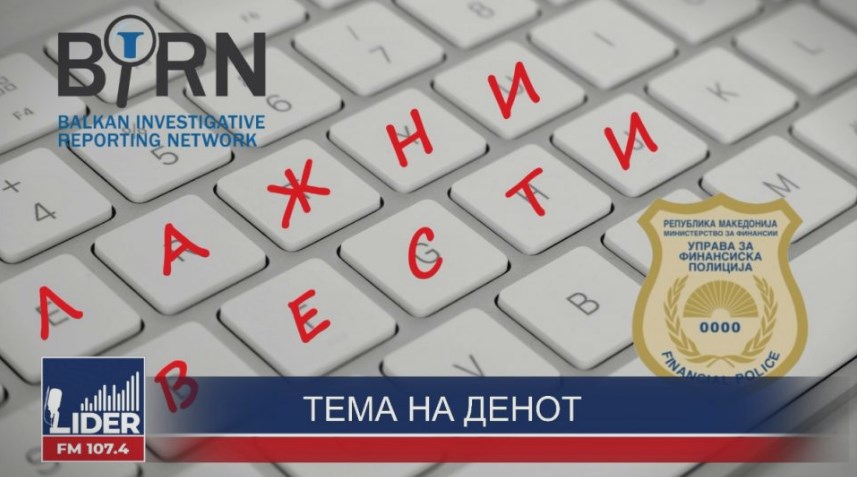 According to an analysis conducted by Radio Lider, the Financial police and the pro-government investigation media network BIRN are working together in a joint operation spreading fake news. Republika is publishing the Lider report in full.

An article, published on Prizma (BIRN’s platform), on December 4, titled “The spreading of Hungarian media on the Balkans is concerning, but they still have little influence”, contained a series of false information regarding the media which are critically opposing the government. This tendency to spread fake news comes at the same time when the government of Macedonia is
trying to implement a series of controversial decisions, such as the negotiations with Bulgaria and the changing of the education system in the country.

According to experts, the ultimate purpose of spreading of these fake news is to discredit the media which are criticizing the government in these crucial times. This is especially scandalous given the fact that those fake news come from a medium which is directly connected to the assets of the controversial stock-market speculator George Soros.

How can someone, who did not even own the company at the time of the transactions, be connected to a tax evasion?

According to information obtained by BIRN, in their article, it is written that the Macedonian Financial Police have filed criminal charges for tax evasion against Peter Schatz. But how can someone, who did not even own the company at the time of the transactions, be connected to a tax evasion? The Financial Police told BIRN that Schatz had made illegal profit for himself and for the company CHS Invest Group, which is the majority owner of Alfa TV.

Schatz did not report the total income in the amount of 11,959,475 denars (about 190,000 euros),”said the police. According to police information, Schatz damaged the Macedonia’s budget with around 19,000 EUR, wrote BIRN in their article. The fact-check, however, proves the opposite. This was neither the case of tax evasion, nor was Mr. Schatz aware that any kind of charges were filed against him, there was no prosecuting procedure.

According to whistleblowers from the Financial Police, at the end of 2018, financial control started looking into the IHS Invest Group, however, not from the Financial Police but from the Public Revenue Office. The audit showed that in 2013, this company had taken a loan of about 9 million denars from another company, which was not paid back. This means that the case is not about any kind of
“income”, but about a loan that was not repaid. At the time of this transaction, the Hungarian investor Peter Shatz was not the owner of CHS Invest Group, so it remains unclear how could he be the one to evade taxes? In fact, according to the information which Radio Lider received from the company, at that moment Schatz was not even aware that a loan had been taken by the previous owners of the company.

According to the laws which were conducted at the time, immediately after the control, the IHS Invest Group received a request in which it was stated that they should pay taxes for their previous loan, after which the company properly paid its taxes at the beginning of 2019. This makes it clear that the BIRN report is fake news because the budget was not damaged nor evaded anywhere. Subsequent amendments to the tax code in Macedonia exempted unpaid loans from tax, but even despite that, according to the claims of IHS Invest Group, the tax on the loan has been fully paid. At the same time, according to information received by whistleblowers from the Financial Police, the company informs that they have not received a letter with any criminal charges for tax evasion and no information that the prosecution charges them for this.

Everyone who criticizes Zaev is financed by “dirty” money

The spreading of fake news by BIRN and the Financial Police does not stop here. In the further part of the article, terms such as “money laundering”, “dirty money” and “suspicious money” are used in an orchestrated way by the institutions and the media without providing any evidence or report about it. The money laundering investigation against Schatz is still open. In August last year, the Financial Police asked the Public Prosecutor’s Office to freeze the money of another Schatz company, Target Media Skopje, based on suspicion that it was being used to transfer potentially dirty money from Slovenia and Hungary.

According to sources from the whistleblowers of the Financial Police, Radio Leader discovers that Schatz’s companies had not been notified of any investigation against them, nor had anyone been summoned for questioning. From here, they also say that the companies provide services which are properly signed with precise contracts, which are later invoiced and taxes are paid properly for. They simply do not understand what kind of dirty money could be involved.

During our communication with the Financial Police spokesman team, we asked them how it is possible that these companies were not informed of any investigation, and why did not the financial police even appear there?

The following part of BIRN’s article also shows that this is a plot of fake news: “They do not have employees, their funding comes from sources of dubious origin, i.e there are crime and abuse of office and authority suspicions. The money by these foreign entities transferred to the Republic of (North) Macedonia, is paid here to cover up whether they originate from a possible crime, through invoices for dubious marketing services. We asked the Financial Police to explain to us what those “sources of suspicious origin”, “crime” and “abuse of office” is? However, like the other questions so far asked, there was also no answer for this
one. It is terrifying when an institution of a country which aspiring for EU membership gives such qualifications, without previously supporting them with facts, especially if it is known that the clients of these companies are established European companies and their delivered invoices are for services that actually happened.

This attitude shows that the Financial Police and the pro-government media, can declare anyone a “criminal” who deals with “dirty money” without proving or prosecuting it. This is of course, conducted in the service of the ruling regime in Macedonia, which is currently facing numerous objections from the European Union regarding media freedom. Practically, it turns out that anyone who is critical of the government of the Prime Minister Zoran Zaev, is publicly harassed as a recipient of dubious money, which is in the service of government propaganda.

Systematic pressure on all critical media

CHS Invest Group, which is mentioned in this article by the pro-government BIRN, is one of several companies that owns a stake in Alfa Television. It is significant that the narrative of the article, and also the statement of the Financial Police is the same as the series of press conferences that the ruling SDSM had last year. The terms “dirty money”, “black money”, “suspicious transactions” which were first used by the ruling party, are now used in the same context by the state institutions.

This speaks of the classic blurring of distinction between the party and the state, and the partisanship of the institutions, that instead of having a state agenda, conduct a partisan agenda, starting with the propagation of fake news and hate speech towards the media which are critical of the government. Such attacks on the media come at a time when the government of Zoran Zaev is failing to secure the start of Macedonia’s negotiations with the EU. In the past few years, the freedom of the media has been one of EU’s main critical points towards Macedonia, which means that the union is clearly aware that this important democratic sector is under
serious pressure from the current government.

Nikoloski on the latest corruption scandals: Zoran Zaev was informed about everything and coordinated everything