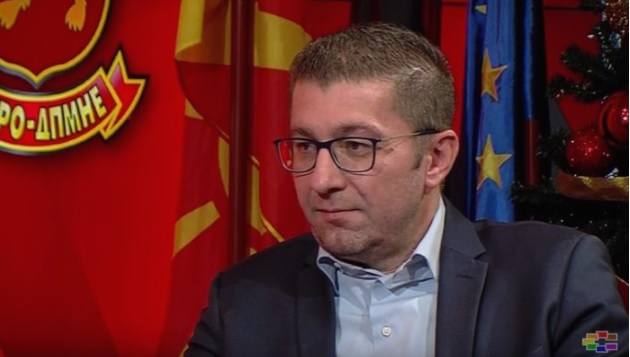 VMRO-DPMNE leader Hristijan Mickoski opened the weekend retreat in Struga which the party holds along with the National Democratic Institute from the United States, and which is attended by the top VMRO leadership. Mickoski said that the party will work with its US partners to become a powerful corrective voice to the Government, and to repair the damage being done by it after it assumes power.

Our duty is to acknowledge our weaknesses, to correct and overcome them. This country needs leadership, after 28 years of independence we need to finally ensure that citizens begin to believe in the democratic principles and that politicians begin to listen to the voice of the people. Our citizens need security, they need to believe in the rule of law, something we unfortunately lack right now. We have poor institutional capacities, we have betrayed expectations, divisions on all lines. We are a country where the mere appointment of a high school principal is the result of political interests and causes divisions. This division disintegrates our country, said Mickoski.

The retreat is attended by NDI country director Chris Henshaw and the new USAID director for Macedonia Gretchen Birkle. Mickoski expressed hope that the retreat will signal restoration of friendship and cooperation with NDI which would increase the ability of VMRO to accomplish Macedonia’s strategic goals.

Our strategic goals are the same as the strategic goals of the Republic of Macedonia. I’m certain that our joint capacity which we are building now in the party structures will soon be used to lead the institutions of our state. Our citizens rightfully expect results, they want the job to get done and they want to see things move for the better, said Mickoski.

Anesthesiologist, gynecologist and nurse from the “Plodnost” hospital in Bitola infected with Covid-19, hospital director calls for mass testing

An employ at the US owned Gentherm car parts plant in Prilep tested positive for the coronavirus. This prompted a temporary cease of operations there and all employees were sent home. Workers told “Republika” that they are yet to be told if they will all be tested for the virus. They are...
Economy 02.04.20 | 15:03

Mickoski: Short-sightedness of government’s economic team, supplemented by Spasovski and Zoran Zaev, prevents from seeing the chance of using money from the pension fund