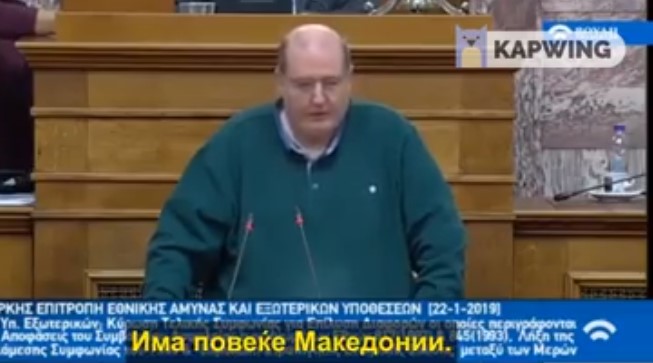 During the heated debate on the ratification of the deal to rename Macedonia, Nikos Filis from the Greek ruling SYRIZA party said that when Greece first captured this region in 1912, it was majority ethnic Macedonian and was ethnically cleansed throughout the decades to make it Greek. Filis, who is known for his outspoken views and for poking holes in the Greek nation building myth, was responding to nationalist protesters in front of the Parliament building who were chanting “Macedonia is one and it is Greek”.

Macedonia is not one and Greek. There are several Macedonias. The other Macedonia is defined with the Bucharest treaty which bears our, Greek signature. When we hear the chant “Macedonia is one and it is Greek” it is seen as irredentism, as disrespect for the international treaties by our country. Maybe it doesn’t sound too good but it is the truth. Greek Macedonia is Greek, and let me clarify, it was MADE Greek, because until 1912/1913 and 1921/1922, when the refugees came, there was no Greek majority in Macedonia – only in some regions in teh south. So it was made Greek by a population exchange and through all the difficult events we and the other peoples from the region went through. So who are we kidding when we say “Macedonia is one and it is Greek?” Only ourselves, Filis said.

Greece captured about a half of the region of Macedonia in 1912, when fighting the Ottomans and kept it through the Second Balkan War in 1913, and many Macedonians were expelled in the process and afterwards. After its defeat to Turkey in 1921, hundreds of thousands of Greek refugees were settled in this part of Macedonia, dramatically changing its ethnic make-up, along with decades of bans on the use of the Macedonian language for the remaining Macedonians.