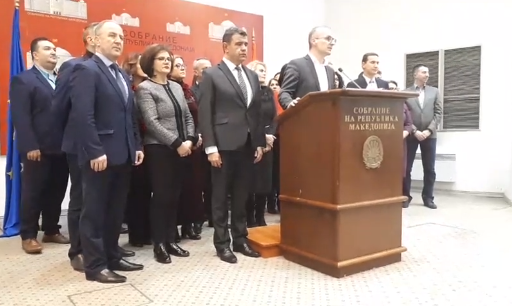 VMRO-DPMNE walked out of the Parliamentary Committee on constitutional affairs and said it will boycott any further debate on the proposed constitutional amendments which rename Macedonia into North Macedonia.

– This is a farce. We were trying to expose it to the public, but the process no longer deserves to be given legitimacy, said VMRO-DPMNE member of Parliament Antonio Milososki speaking at a press conference in the Parliament attended by most of the party’s representatives. Milososki said that the citizens clearly expressed their opinion on the proposed amendments when they boycotted the referendum on September 30th.

He added that, on top of the failed referendum, the entire debate over the constitutional amendments was farcical, with only supporters of the proposals invited to “debate” Prime Minister Zaev and his ministers.

– Given the sensitive proposals on the Constitution of the Republic of Macedonia, and the declared will of the people at a referendum, we, as members of Parliament elected by the people, don’t feel further need to give legitimacy to this farce. Those in the narrow ruling circle, who obviously undertook obligations in front of someone else to amend the Constitution against the will of the people, can continue to do so without us. They should be aware that their actions are illegal, unconstitutional and have no legitimacy in the eyes of the opposition of the Republic of Macedonia, Milososki said.