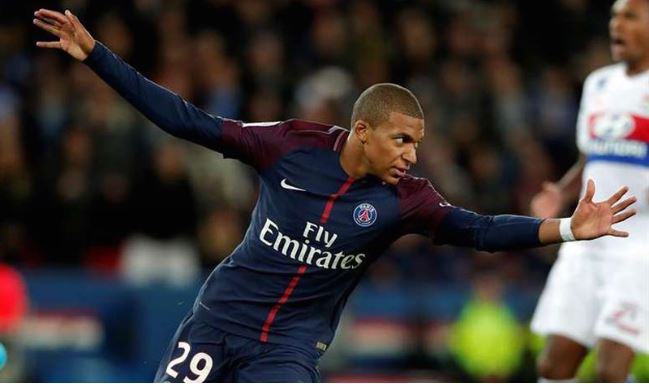 Paris Saint-Germain took a major step towards the Champions League quarter-finals with a 2-0 road victory in Tuesday’s first leg of the round of 16 at 10-man Manchester United while teenager Nicolo Zaniolo scored twice in Roma’s 2-1 home win over Porto.

Presnel Kimpembe scored PSG’s opener in the 53rd minute and Kylian Mbappe added a second in the 60th minute.

In Rome, the 19-year-old Zaniolo struck in the 70th and 76th minutes while Adrian Lopez secured Porto an away goal in the 79th.

Both return legs will be played on March 6.

“It’s fine, the next round is closer. We’re happy but there is one game remaining. We’ll prepare ourselves over the next three weeks to try and ensure we go through. We experienced a dip in fitness in the last 20 minutes; we’ll have to work on that,” Mbappe said.

“Our formation was rather new and it took us time to adapt – midfield was crowded. They pushed to score early in the second half but we managed to score one and then two.”

In Manchester, neither side could create any dangerous chances in the first half-hour other than Mbappe hitting the side netting from a tight angle in the 29th minutes for PSG.

United keeper David de Gea preserved his clean sheet in the 53rd minute with a great save, pushing Mbappe’s header wide of his post.

But the French broke through seconds later on the ensuing corner with Angel di Maria striking it to the far left post where Kimpembe side-footed his volley into the roof of the net for the critical away goal.

Paris Saint-Germain doubled the lead just seven minutes later on the counter attack with di Maria crossing from the left side into Mbappe, who out-paced two defenders and hit home to make it 2-0.

Manchester finished the match a man down as Paul Pogba was sent off in the 89th minute with a second booking.

PSG, who were playing without stars like Neymar and Edinson Cavani, continued to push forward. But de Gea made sure Manchester would have a chance in the return leg with two great saves on Mbappe in the 63rd minute and against Juan Bernat a minute later.

Manchester had been flying high under interim coach Ole Gunnar Solskjaer, but the Norwegian will have his work cut out for him in the return leg in Paris.

The 2018 semifinalists Roma and guests Porto were both cautious in the Italian capital until Edin Dzeko slammed his attempt off the near left upright in the 38th minute for the hosts.

But the club’s young star talent Zaniolo showed his class in the second half as he struck home a pass from Dzeko in the 70th minute.

Zaniolo completed the brace six minutes later as Dzeko’s long distance blast went off the post and into the path of the youngster, who had no trouble converting.

Porto grabbed an important away goal in the 79th minute through Lopez, who side-footed a mis-hit attempt from Tiquinho Soares past Roma keeper Antonio Mirante.

“Zaniolo is not a surprise any more. His physical strength is incredible for a guy of his age and he combines it with great technique. He is already a great player, but he will become a great champion,” Roma captain Daniele de Rossi said.

“We were expecting a game like this against Porto, it’s a pity only to concede that unlucky goal because we had been focused for the entire game otherwise. We cannot be calm with a 2-1 victory but I think now we can say the chances of qualification are 51-49 for us.”

The Liverpool against Bayern Munich and Schalke versus Manchester United first legs will come next week.