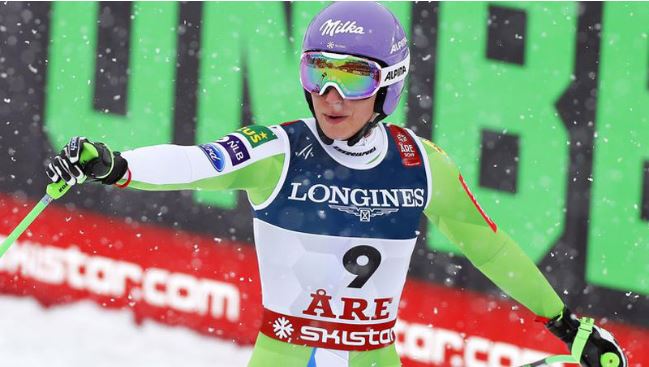 Lindsey Vonn captured an unlikely bronze to end a decorated career with yet another major medal in the women’s downhill as Ilka Stuhec of Slovenia won back-to back titles at the alpine ski world championships in Are on Sunday.

Despite two golds and seven previous medals at world championships, the last one came as probably the biggest surprise for the 34-year-old US great, who becomes the oldest woman to win a medal at a world championship.

After crashing out in the super-g on Tuesday and with only three World Cup races before the championship, Vonn was wrongly dismissed as a medals contender in her final race before retiring.

But starting cautiously with bib three on a shortened course in Are, the 2010 downhill Olympic champion stepped up a gear over the lower part of the course and held the lead until Stuhec, starting ninth, bettered her time.

“It’s crazy, a perfect end for my whole career,” Vonn said in an interview with Germany’s ARD television.

“I said to myself ‘I had to get down there.’ I tried to stay relaxed and focused because my aim was also to get to the finishing line because it hasn’t been so easy for me. Now is the time to celebrate.”

Stuhec’s 1 minute 1.74 seconds on a course cut by 566 metres to 1,670 metres because of wind could not be bettered, and only Switzerland’s Corinne Suter was able to beat Vonn, finishing 0.23 seconds behind Stuhec for a second medal following bronze in the super-g.

“I knew I could put in a fast run but hoped for fair conditions so I could show it. I’m really happy,” Stuhec said in a first reaction.

Stuhec won the 2017 gold but then missed the entire 2017-18 season with the Pyeongchang Olympics over a cruciate knee ligament tear.

Vonn was 0.49 seconds off Stuhec and left some of the favourites well behind her including Italy’s Olympic champion Sofia Goggia and fancied Austrians Ramona Siebenhofer and Nicole Schmidhofer, who again disappointed following the super-g.

Like Alek Lund Svindal, the downhill silver medallist the previous day, Vonn retires with a major medal – and the two skiing greats plan to celebrate together in the evening.

She also joins Svindal, fellow Norwegian Kjetil Andre Aamodt and Marc Girardelli of Luxembourg as the only skiers to collect a medal at six world championships.

Vonn’s who retires with 82 World Cup wins, four victories short of Ingemar Stenmark’s record of 86, was presented by a bouquet of flowers by the Swedish great after she finished her run.

“I raced with a lot of heart and a lot of risk. Ingemar was there, it’s really a great dream,” Vonn said.