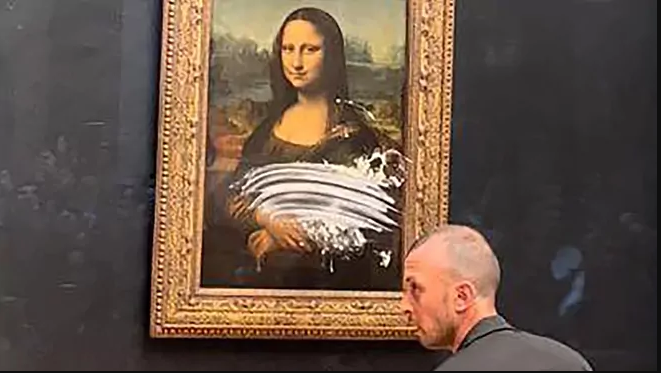 mages of the Mona Lisa painting stained with cake cream after a person stamped a cake on it went viral on Sunday, despite the fact that the cake actually collided with the glass that protects Leonardo da Vinci’s work in the Louvre Museum in Paris, marca.com reported.

According to witness testimony, the perpetrator was a man in a wheelchair who wore a wig. To the surprise of the other guests, he would have suddenly stood up and approached La Gioconda, throwing the cake at her.

Those in charge of the museum’s security rushed to eject the man from the room, while the rest of those present continued to photograph the situation nonstop.

The painting, which was created between 1503 and 1519 by Leonardo da Vinci, was unaffected because it was exposed and protected by safety glass, which was where the sweet’s remains were impregnated.

And, despite the astonishment of those who were in the museum’s most inaccessible room at the time, which is always packed with tourists, the incident did not escalate. As seen in some of the videos shared on social media, Louvre security workers rushed to remove the attacker from the building and clean the glass.