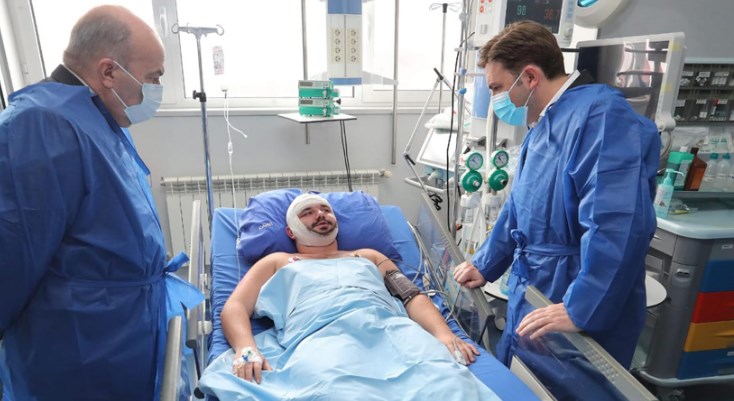 Prime Minister Dimitar Kovacevski spoke out about the incident in Ohrid last week, where a local Bulgarian activist Hristijan Pendikov was badly beaten up in a possible hate crime attack. Kovacevski, who now faces a renewed veto of Macedonia’s EU accession talks from Bulgaria over the incident, condemned the assault. Kovacevski also condemned comments from Bulgarian nationalists who deny the existence of the Macedonian nation as a separate nation with a separate history from the Bulgarian.

I do not justify violence of any kind. I condemn it and will continue to condemn it, just as I condemn every provocation that comes from within or from outside, that hurts the feelings of Macedonians, that brings unease among our citizens. For me, such provocations are unacceptable, Kovacevski said.

Bulgarian nationalists Angel Dzhambazhki and Kostadin Kostadinov were in Skopje earlier in January, at the anniversary of the assassination of a Serbian occupation officer carried out by Mara Buneva in 1928, and during the large gathering they declared Macedonia to be “a Bulgarian land”.

Kovacevski clumsily compared the incident to fights at a football match and then continued to condemn the Bulgarian gathering in Macedonia and discussed the latest conditions that Bulgaria imposed on Macedonia as part of its EU accession process – through the so-called French proposal.

This summer I sat and negotiated with Brussels and 27 EU member states with a bitter feeling that was shared by all our fellow citizens, especially the ethnic Macedonians, because of the clear narrative and hysteria caused by provocations coming from within and from outside. We made a decision with my colleagues for the European future of our state, of the current and future generations. We won’t sit here and watch how merciless violence brings down all that was built and kidnaps our international and European policy. Those who initiated the events of the past week and the events that came before don’t want to see Macedonia in the EU, Kovacevski said, promising that the attack will be investigated quickly.