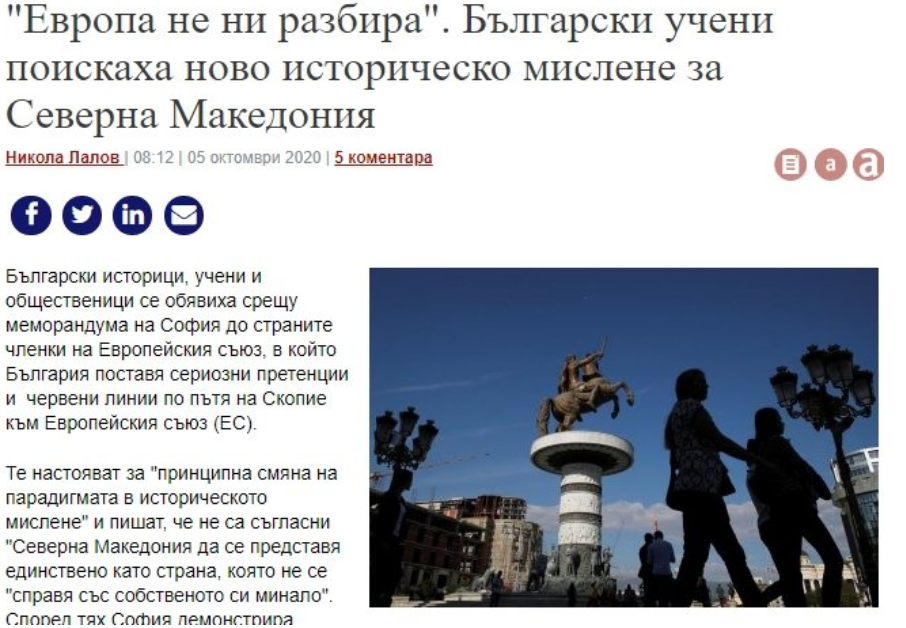 A group of Bulgarian historians and scholars issued an open letter condemning the position of the historians appointed to the joint committee with Macedonia, led by Angel Dimitrov. The group insists that the hardline position taken by Dimitrov is violating the principles of historic science and will be difficult to understand by the European Union.

We are deeply convinced that this memorandum does not represent the achievements of Bulgarian historians over the past decades. We don’t see how Europe can understand the positions of some influential Bulgarian scholars who do not speak the language of contemporary historiography or the modern humanitarian and liberal arts. The Bulgarian memorandum does not reflect the principles and values on which the European Union is based and in whose support it is published. We do not agree with the position that the Republic of “North” Macedonia should be represented as the only party which needs to deal with its past. We do not agree that the only problem is the ideological legacy of Communist Yugoslavia. Another problem is the worn out legacy of the romanticized, myth-making historiographic opinion in Bulgaria, the open letter states.

The letter is signed by historians such as Stefan Decev, Cavdar Marinov, Aleksandar Vezenkov, Marija Todorova, Dimitar Becev and others, including antropologist Ivaylo Dicev and Mihail Ivanov, adviser to former President Zelu Zelev under whose term Bulgaria was the first country to recognize Macedonia as independent. Many of them also came out in opposition to the similarly worded declaration of the Bulgarian Parliament from 2019. This group goes on to state that the position of the Bulgarian right wing Government is based on outdated concepts of “national history”, when it alleges that Macedonians were created as part of an “ethnic and linguistic engineering”. The group points out that all languages are in a sense artificial and there is no correct dialect.

The attempts to determine the birth date of a nation and a language are scientifically unsound and in collision with the historical science and the liberal and humanitarian sciences. Even as we accept the position of having a “shared history”, we oppose its use to impose one point of view, in this case the official Bulgarian version of the past”, the group states, while also rejecting the claim in the memorandum that the Yugoslav Communist regime killed more than 20,000 Bulgarians in Macedonia between 1944 and 1946, while imprisoning or expelling 100,000 Bulgarians, as beyond any reasonable parameters.