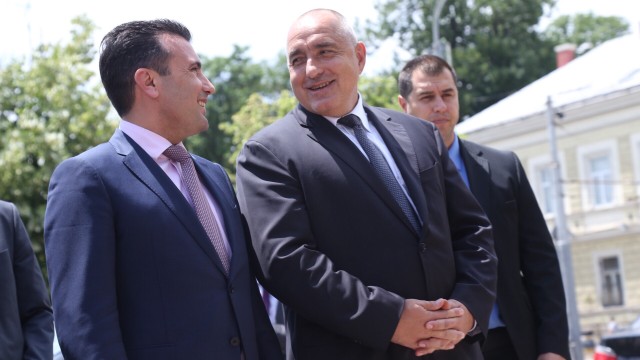 The document with which Bulgaria sets conditions for Macedonia on which the country’s negotiating process depends has been published by the Bulgarian BGNES agency in detail.

According to the document, a candidate country should not bring open questions in the EU, especially in relation to member states. Regarding the Republic of Macedonia, there are still a number of issues that may negatively affect EU decision-making after accession.

The issues are a consequence of the way this country is dealing with its own past. Finding lasting solutions will require real political will and courage. The accession road of the Republic of Macedonia provides a valuable opportunity for its leadership to break with the ideological legacy and practices of communist Yugoslavia. The enlargement process must not legitimize the ethnic and linguistic engineering that took place during the former authoritarian regimes, reads the document.

In the second part of the document, Macedonia is described as a geographical and historical area, today is located within the borders of six countries – Bulgaria, Greece, the Republic of Macedonia, Albania, Kosovo and Serbia. Therefore, all attempts to impose the geographical term Macedonia as the official name of the newly created state in 1992 for 28 years, were burdened with political sensitivity, reads the document.

In neighboring countries, the term “Macedonian” is used to denote geographical origin, rather than national identity. In Bulgaria, hundreds of thousands of Bulgarians identify as “Macedonians” in terms of their regional affiliation, which clearly indicates Bulgarian ethnic origin. For this reason, a significant misunderstanding occurs when the terms “Macedonian” and “originating from the Republic of Macedonia” are interchangeable in international forums, according to the document.

Moreover, Bulgaria in the document went on to say that when, after the First World War, part of the geographical area of ​​Macedonia was included in the Kingdom of Yugoslavia, the vast majority of the Slavic population clearly identified as Bulgarian. This is confirmed by all diplomatic and historical information from that time. Between the two world wars, Belgrade tried to eradicate the Bulgarian identity of this population by imposing a new “southern Serbian”. Because this attempt failed, after the Second World War, the Yugoslav communist leader Josip Broz Tito resorted to imposing another new identity, this time “Macedonian”, in the then Socialist Republic of Macedonia (SRM). Tito was relieved and inspired by the decision of the Communist International (Comintern) in 1934 to create new peoples “Macedonian”, “Thracians” and “Dobrudja”.

Tito’s project was realized by inventing a new history, which laid the foundations of this new “Macedonian” concept, in order to replace the traditional Bulgarian identity with a regional one. It was built at the expense of the history and geography of neighboring countries, thus laying the foundations for future territorial and minority claims to Yugoslavia. In order to implement this policy, the “linguists” of the Anti-Fascist Assembly for National Liberation of Macedonia (ASNOM) controlled by the communists announced on August 2, 1944 the existence of a separate “Macedonian” language, reads the document with which Bulgaria sets conditions for the start of Macedonia‘s EU accession talks.

According to Bulgaria, the ethnic engineering project to create a “Macedonian identity” and a “Macedonian nation” by borrowing parts of the history of neighboring countries still leads to very contradictory results. Identity policies reached their peak and took on grotesque proportions with the anti-ancient campaign of nationalist governments between 2006 and 2017.

In the document Bulgaria also rebuts Macedonia’s claims of a “Macedonian minority” in Bulgaria. “Official textbooks in history and geography, literature, visual arts, and some media are also used to reinforce these claims and to create antagonism with Bulgaria by spreading stereotypes”, it is stated in the document.

Furthermore, Bulgaria claims that it constantly supports Macedonia’s NATO and EU goals and that it has never had any territorial claims and has never challenged the right of self-identification of the citizens of Macedonia, especially, as it say, given that several generations grew up under Yugoslav propaganda.

However, Bulgaria can not accept that the current process of nation building in the Republic of Macedonia will take place by revising our common history, denying our common ethnic and linguistic roots or unfounded claims about the existence of a “Macedonian minority” in Bulgaria. These manifestations of state-funded anti-Bulgarian ideology and practice are contrary to European values and should not be legitimized by joining the EU. Bulgaria’s position on the Macedonia accession path aims to protect itself from unfounded minority, historical, linguistic and other claims. This does not deny the obligations of each member state to respect individual human rights, including those of self-identification, reads the document.

Regarding the Agreement on Friendship, Good Neighborliness and Cooperation, signed on August 1, 2017, Bulgaria in the document says that its implementation has been stalled largely after the decision of Macedonia’s representatives to terminate their participation indefinitely in the work of the joint historical commission in 2019 due to the upcoming election campaign.

In the same period, Bulgarian investors faced growing work obstacles in Macedonia. Local citizens (including former Prime Ministers Georgievski and Buckovski, as well as former Foreign Minister Malevski) who spoke out in support of a common historical past have been subjected to hate speech and smear campaigns, reads the document.

According to Bulgaria’s document, the “Macedonian language” or ethnicity did not exist until August 2, 1944. Their creation is part of the overall construction of a special non-Bulgarian identity, which aims to break the ties between the population of the then SRM and Bulgaria, it is stated in the document.

Bulgaria claims that the creation of the “Macedonian language” in 1944 in the former Yugoslavia was an act of secondary codification (recodification) based on the Bulgarian literary language, further “enriched” with folk forms, thus simulating a “natural” process based on dialect.