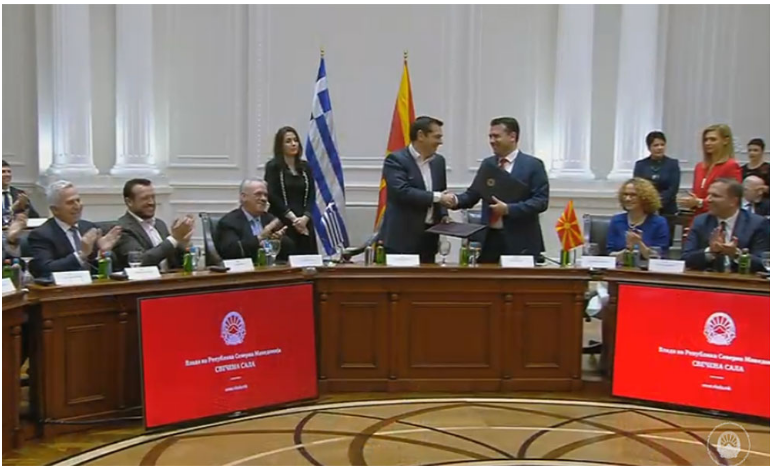 The Prime Ministers of Macedonia and Greece Zoran Zaev and Alexis Tsipras and ministers of the two governments signed Tuesday in Skopje several agreements to boost bilateral cooperation.

Zaev and Tsipras, during joint session of the High-Level Cooperation Council between the two countries, signed an action plan to strengthen overall cooperation in accordance with the Prespa Agreement.

Deputy PM for European Affairs Bujar Osmani and Greek Alternate Foreign Minister Sia Anagnostopoulou signed a memo for cooperation between the Secretariat for European Affairs and the Greek Ministry of Foreign Affairs for accelerating the process of integration of the Republic of Macedonia into the EU.

Transport Ministers Goran Sugareski and Christos Spirtzis signed memo of understanding for development of the road and rail connection on Thessaloniki – Skopje – Tabanovce route. A memorandum of cooperation in transport as well as a memorandum on cooperation in the energy sphere between the companies MER Skopje and gas grid operator DESPA were also signed.

Deputy Foreign Minister Andrej Zernovski and the Greek Alternate Foreign Minister Sia Anagnostopoulou signed an agreement on opening a new border crossing between the two countries for linking Majdan in Macedonia and Promachonas in Greece.