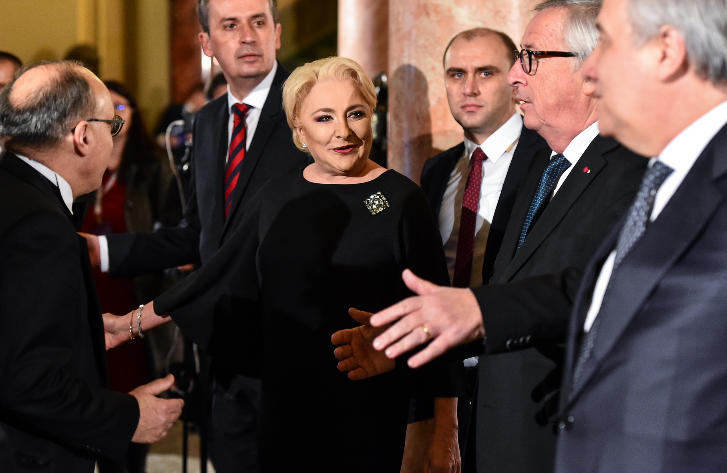 Backstage drama came to the fore Thursday as Romania assumed the presidency of the European Union for the first time, an international debut that was preceded by questions about the country’s readiness for the role.

The formerly communist country’s turn in the rotating office brought EU officials to Bucharest as the president and prime minister fought over which of them would represent Romania at summits. Notably absent was the convicted politician who is assumed to be the one in charge. He is suing the EU over fraud allegations.

Apprehension was evident several times during an evening ceremony at an august concert hall where the start of Romania’s six-month term was marked.

“It depends only on you whether for Europe, Romanian politics will be a good example or a dire warning,” EU Council President Donald Tusk told his hosts during a speech delivered in the Romanian language.

As snow fell, hundreds of protesters outside the Antenaeum concert hall waved EU and Romanian flags while trying to put a spotlight on government corruption.

A light projector beamed a green message onto the palace where EU officials planned to dine, saying the protesters “want the EU” and Romania’s ruling Social Democratic Party “wants Russia.”

During the ceremony inside, politicians listened to an orchestra performing George Enescu’s often intense and impulsive Romanian Rhapsody — and heard some bluntly worded speeches.

“As a reminiscence of the communist past, some institutions and decision-makers are still holding on to the unchecked power they have previously indulged in,” the president of Romania’s Senate, Calin Popescu Tariceanu said.

He did not specify the places and people he accused of claiming the same unaccountability they collectively enjoyed before 1989,” the year communism fell in Romania.

Holding the EU presidency matters to the bloc’s member nations, especially one like Romania that joined only a dozen years ago. The role requires keeping EU business flowing during the six-month term, but lacks the authority to block or undermine the communal business of the bloc.

Leftist and liberal EU politicians come out in support of Laura Kovesi, as she faces criminal charges in Romania

The Republic of Macedonia is a black hole in the region and in Europe in terms of the number of coronavirus infections and deaths. The citizens are left alone, and Zaev and Filipce only count the lost lives and lie that the epidemic has been handled and that they have the situation under control, accuses...
Macedonia 06.08.20 | 22:56