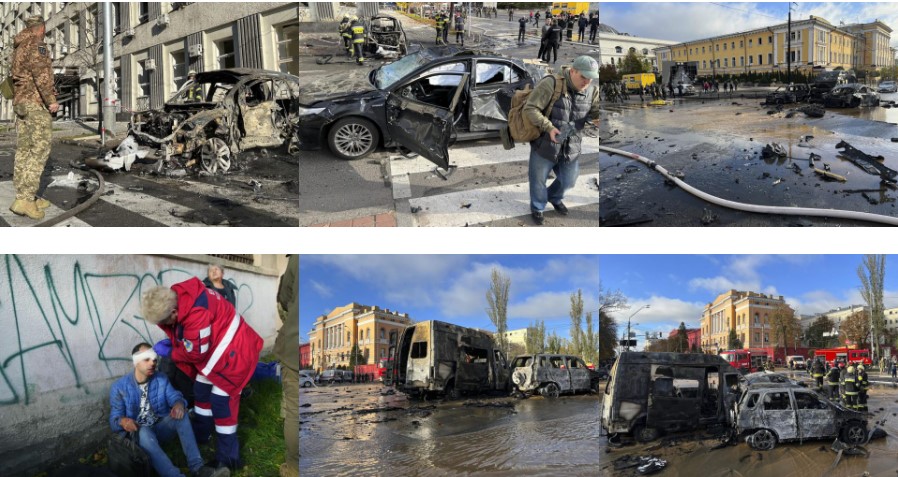 Large explosions erupted in the center of the Ukrainian capital Kyiv on Monday morning, after Moscow previously threatened retaliation for the weekend blast that damaged Russia’s critical bridge to Crimea.

There were several impacts in the city, mayor Vitali Klitschko said.

Clouds of smoke were seen over Kyiv’s skyline. The exact number of impacts and their targets were unclear, with witnesses reporting hearing three or four.

Klitschko said more details would be released soon. Writing on Telegram, he urged residents of Kyiv to seek shelter from Russian missile fire.

The apparent missile strikes follow Saturday’s explosion on the Kerch Bridge, which links Russia to the illegally annexed Ukrainian territory of Crimea and is a key supply route for Moscow’s faltering war on Ukraine.

The SBU headquarters is located in the city center in Kyiv. The Russian government has repeatedly threatened to target command posts in the Ukrainian capital if attacks on territory Russia claims does not stop.

Kyiv has been hit by Russian missiles several times since the beginning of the war on Feb. 24. But Monday’s was the worst incident of its kind and the first attack on the city in months.

“One of the rockets landed near the Hrushevsky monument on Volodymyr Street. The rescuers are at work,” said Interior Ministry adviser Anton Gerashchenko. Volodymyr Street is right in the centre of Kyiv.

Russia’s Security Council, which Medvedev serves as the deputy head of, was due to meet on Monday.

Russia says investigations are under way into the bridge explosion, which was also a major symbolic blow to Putin. The 19-kilometer structure was opened by the Kremlin leader himself to much pomp and fanfare in 2018.

Top Ukrainian officials have gloated over the bridge incident, but so far Kiev has not admitted involvement in the attack.