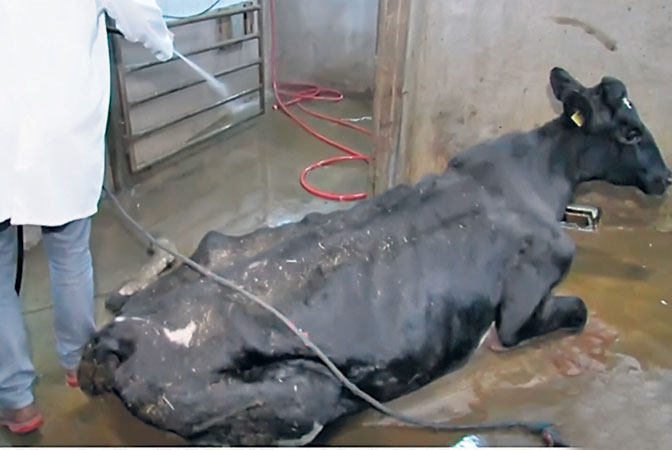 Undercover footage that appears to show extremely sick cows being smuggled into a Polish slaughterhouse and sold on with little or no veterinary inspection has raised alarm about standards in one of the EU’s largest meat exporters.

Covert footage in a slaughterhouse in the central Polish region of Mazovia appears to show cows so sick that they are unable to stand up being dragged out of trucks and into the slaughterhouse using a winch, with ropes tied around their horns or legs.

The slaughter of sick cows appears to take place at night with no veterinary officials on site, another contravention of basic standards. Workers at the slaughterhouse appear to remove evidence from the carcasses such as pressure sores and tumours that indicate that the cows have been sick and lying on their side for days on end.

Experts who have seen the film said it raises the possibility of serious health risks, and called on the Polish government to act quickly to notify all other European states. Chris Elliott, professor of food safety at Queen’s University in Belfast and founder of the Institute for Global Food Security, who led the UK government’s independent review of food systems following the 2013 horsemeat scandal, told the Guardian: “If there is any evidence at all that some of this meat has left Poland then there will be the potential for a European-wide safety alert, with the involvement of many regulatory agencies and potentially police forces from across Europe.”

In 2017, according to the most recent UN Comtrade figures available, Poland exported more than 415m kg of beef, worth more than $1.5bn. HMRC figures for that year show that the UK, one of Poland’s largest markets for meat, bought 16m kg of beef (fresh, frozen and offal), worth $64m.

The demonisation of Poland and Hungary