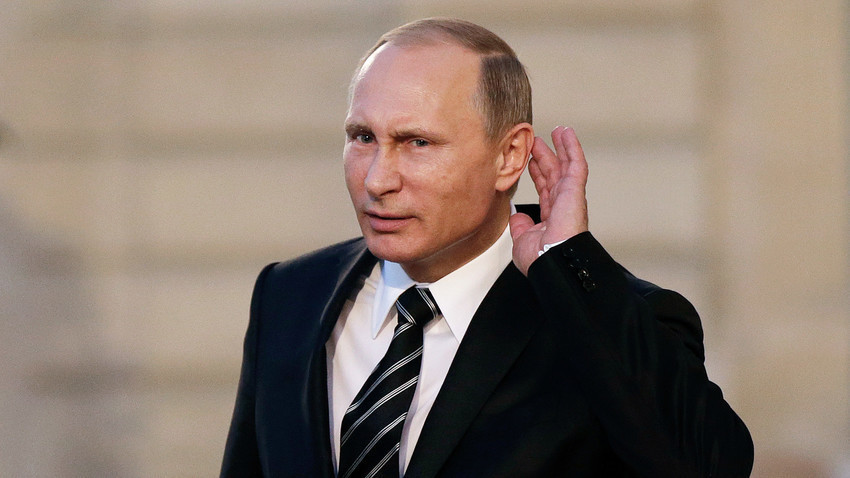 Russian President Vladimir Putin hosted his annual end-of-year press conference Thursday, a marathon event in which he fielded questions for hours from hundreds of journalists on topics ranging from Donald Trump to the war in Syria to his marriage prospects.

This year, the Kremlin said it had accredited 1,700 Russian and foreign journalists, who packed into an auditorium in downtown Moscow.

The press conference has become an annual ritual, held almost every year during Putin’s rule in Russia. It is broadcast live via Russian state media and lasts for hours. This year, Putin spoke for just over 4 hours, still far off his record of 4 hours and 40 minutes in 2008.

Despite Putin’s omnipresence on Russian television, this is one of the few occasions for foreign and independent journalists to ask a question directly of the Russian president.

The press conference, however, is heavily curated. The Kremlin press service proposes questions beforehand, and decides who will be called on to speak. Follow-up questions are not permitted, allowing Putin to disarm all but the sharpest queries and make assertions that can’t be challenged. The audience is overwhelmingly friendly and often breaks into applause.

On Thursday, Roman Dobrokhotov, the editor the Russian site, The Insider, who helped unmask two Russian military intelligence agents involved in a nerve agent attack in the UK earlier this year, said he was barred from entering the venue, despite being accredited.

Putin was in energetic form this year, picking out many of the journalists himself and making jokes throughout the marathon Q&A.