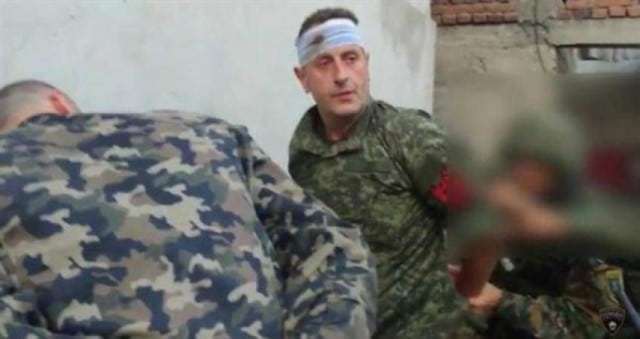 Sami Ukshini, one of the captured leaders of the 40 strong group of Albanian terrorists who attacked Kumanovo in May 2015 killing eight Macedonian officers, joined in the chorus of threats aimed against VMRO-DPMNE and its current and former leadership. On Thursday, members of the group attacked two former VMRO Ministers Mile Janakieski and Spiro Ristovski, who are imprisoned by the SDSM led Government, and after the attack the terrorists are openly threatening party leader Hristijan Mickoski, former leader Nikola Dimitrov and other VMRO officials who also face arrests. Asked about the threats, Mickoski said that he does not respond to cowards.

We are not cowards, you and your party are chauvinists. Regarding the beating of your party members, the former Gruevski ministers, they are worse than prostitutes who at least try to resist when attacked. In the case of Divo Naselje (the Kumanovo attack) we came to protect the rights of our compatriots, what happened happened, but we fought as best as we could and we surrendered after receiving guarantees from OSCE. Gruevski executed four members of our group and he will pay now, or in 100 years, Ukshini, who goes by the name “Commander Sokoli”, writes in a mesage to Mickoski.

In his letter he says that the “issue” will be closed only if the members of the group are killed, otherwise, they will take their revenge against Mickoski, Gruevski and all VMRO officials.

Previously, another commander in the group, Muhamed Krasniqi, sent out similar threats toward VMRO officials but also toward Ali Ahmeti, leader of the ruling Albanian DUI party.

Mickoski offers an immediate vote to amend the electoral model