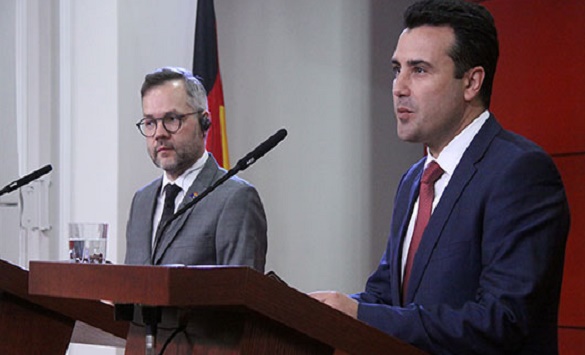 The resolution to the name dispute between Greece and Macedonia is a typical example of peaceful conflict settlement among European partners. The compromise paves the way for Euro-Atlantic integration of North Macedonia. Now the European Union needs to deliver too, German Minister for European Affairs Michael Roth said in the article “The path of the Balkans must lead to the EU” published in the German newspaper Die Welt.

“Courageous and committed politicians on both sides made history through their personal commitment. In the meantime, the parliaments in Macedonia and Greece ratified Prespa Agreement, which ended the 27-year-old name dispute. Discussions in Skopje and Athens were controversial and full of nationalistic passion and arousing fears. Prime Ministers Alexis Tsipras and Zoran Zaev risked a lot politically and gained a lot for their countries and the entire region,” Roth noted.

Under the Prespa Agreement, Greece commits itself to no longer block Macedonia on the path to the EU and NATO, and additionally both sides will take concrete steps for reconciliation and closer cooperation.

“For Skopje to continue on its path of reform, the EU perspective must remain tangible and clear for the Macedonians. Large majority of especially young generation are longing for EU. Credible accession process always includes two sides. Now, the EU also has to deliver. Concrete efforts from candidate countries require concrete progress in the accession process. Therefore, the EU should now quickly begin accession negotiations with North Macedonia, Roth noted.

The EU perspective for the countries of the Western Balkan represents also a great opportunity for the EU.

“Using it wisely is also our strategic interest. However, if the EU fails in the Balkans, in a region that is historically, geographically and culturally close to us, how can it be seen as a serious global actor. Resolving the name dispute, Skopje paved the right way for the EU and simultaneously sent a clear message to the region – nationalism and populism are leading to a dead end,” Roth said.

According to him, the yes to the name change is also a rejection of the nationalist forces in the Balkans.

“At a time when populism and nationalism are testing the European model, reconciliation between Macedonia and Greece is a real motive for the rest of Europe – uniting instead of dividing, dialogue and compromise instead of nationalism and egoism – that’s what all EU partners should take as an example,” concluded Roth.