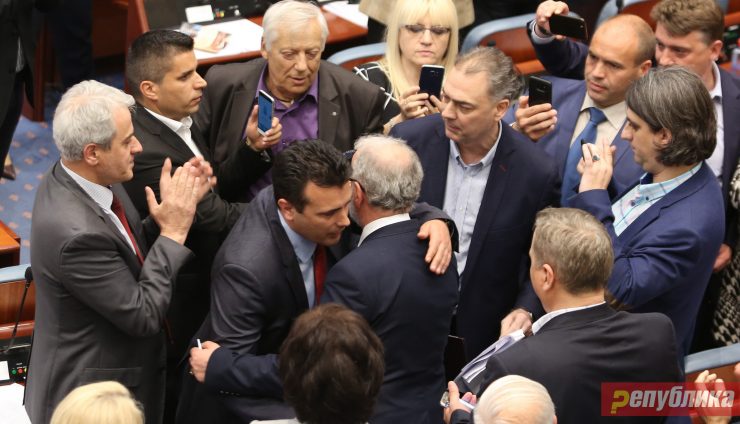 Former Prime Minister and VMRO leader Nikola Gruevski responded to the renewed allegations from the SDSM party over the April 27th 2017 incident in the Parliament. The issue of the incident when hundreds of protesters stormed the Parliament as SDSM and its Albanian coalition partners were staging an irregular vote for a new Speaker is raised as VMRO-DPMNE calls for a retrial of the 16 protesters and police officials sentenced over the incident.

The demand was made during a large rally on Sunday. SDSM responded to the massive protest by claiming that it is supported by Nikola Gruevski and insisting that the protesters were trying to prevent a democratic vote for a new Speaker.

I believe that the direct inspiration for te scenario to cause an incident on April 27th was in the incoming Government of SDSM, then still in the opposition. Their over-emphasized finger-pointing toward their political opponents at every moment, thousands times over, reveals their fear that the true creators of the scenario will be shown. Why would they continue to point their fingers at other parties without any evidence, and pressure judges and prosecutors to follow their request if not to solidify the theory that someone else, other than them, provoked the incident, Gruevski writes. 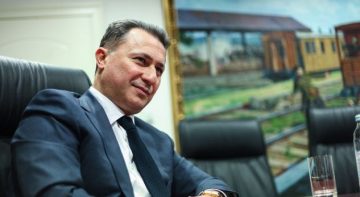 The incident erupted when SDSM, DUI and several other Albanian parties staged a vote for Talat Xhaferi to be named Speaker while thousands of people were gathered in front of the Parliament, in a regularly scheduled protest against the creation of an SDSM led Government that would change the name of Macedonia and make concessions on national identity issues to Albanians and neighboring countries. VMRO was preventing a vote by filibustering in the Parliament, and the session was concluded for the day when the SDSM led members of Parliament gathered in a corner of the hall and held an irregular vote. News of this, as well as previous provocative acts from Albanian members of Parliament, provoked the protesters to move toward the building, while several later amnestied VMRO members of Parliament opened the doors to them.

The vote could’ve taken place several hours prior or later, not when the protesters, who were gathering peacefully and in dignified manner each day for 60 days, were in front of the doors. The timing was made precisely when the protesters were alertly awaiting for news from inside the Parliament, through live-streams provided by SDSM members of Parliament. And after the vote was over, why didn’t they leave the building at once, aware that the protesters are at the doors? Why did they choose to hold a press conference inside the Parliament – instead of doing it elsewhere, at a safer location. They were toying with the emotions of the people, of the protesters who were there to defend their Constitution, the law and to renounce the Tirana Platform and were likely instructed by crisis management experts into provoking an incident that they will blame on us, on our party and the leadership at the time, portraying us as undemocratic and violent people determined not to relinquish power peacefully, and for that they received strong support from outside and inside the country. Sadly the succeeded, for the time being, until one day it will all be revealed, Gruevski said.

He denounces the process against the protesters, members of Parliament, protest organizers and police officials, some of whom were later amnestied by the Zaev regime – especially the members of Parliament who were needed for the name change vote. According to Gruevski, the charge of terrorism is unimaginable and politically motivated, as well as the sentences against him, former Interior Minister Gordana Jankuloska and many other political prisoners. Gruevski also names other violations of democratic standards and the Constitution by the Zaev regime.