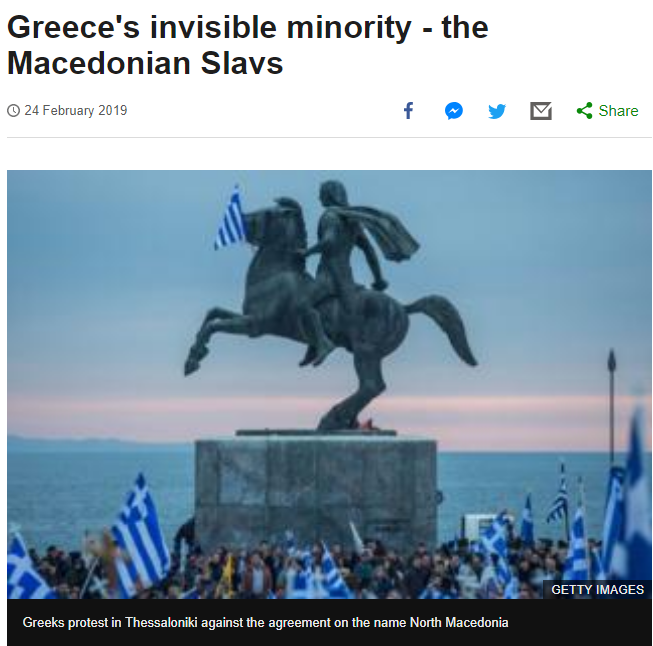 BBC’s report, in which the British public service broadcaster presented the testimony of a Macedonian man from Aegean Macedonia over the decades-long repression, persecution and violation of their human rights by Greece, has caused undivided positive reactions in Macedonia and a storm of criticism in Greece.

However, the report is contrary to the recently published guidelines of the Ministry of Foreign Affairs, because on many occasions, including in the title of the report, the Macedonians are referred to as “Macedonian Slavs”.

BBC report on the persecuted Macedonian minority in Greece

The term “Macedonian Slavs”, which is occasionally used in Greece in addition to terms as a “Slavic-speaking minority”, is in contrast to the guidelines published by the Ministry of Foreign Affairs, which insist that for expression of ethnic and cultural characteristic of the Macedonians will be used solely the the term Macedonians, and no other names derived from the name “North Macedonia” as North Macedonians.

The Ministry of Foreign Affairs told “Republika” that they are in the process of informing the major media outlets worldwide about the instructions on how to report in accordance with the Prespa Agreement.

The Ministry of Foreign Affairs has prepared media instructions deriving from the Prespa Agreement. The process of informing the major international media outlets is ongoing. This is a complex process and will last for a longer period, the MoFA told “Republika”.

The Foreign Ministry of Greece, where there is a raging argument over BBC’s report and the touching details about the persecution of Macedonians in Aegean Macedonia, has also prepared its instructions for using the name “North Macedonia”, but it remains unclear whether Greece will agree Macedonians to be referred to as Macedonians in the media worldwide. Over the weekend several Greek commentators urged Macedonians to use the long form of nationality as defined by the Prespa Agreement – “Macedonian / citizen of the Republic of North Macedonia”.

The note of the Macedonian Foreign Ministry says that the adjective “Macedonian” must be used to describe the ethnic and cultural identity of the people, its language, history, culture, territory and other attributes. The note insists that other adjectives, including “North Macedonian”, “Northern Macedonian”, “N. Macedonian” and “NorthMacedonian” should not be used. Thus, the term “Macedonian Slavs” should also be out of use.