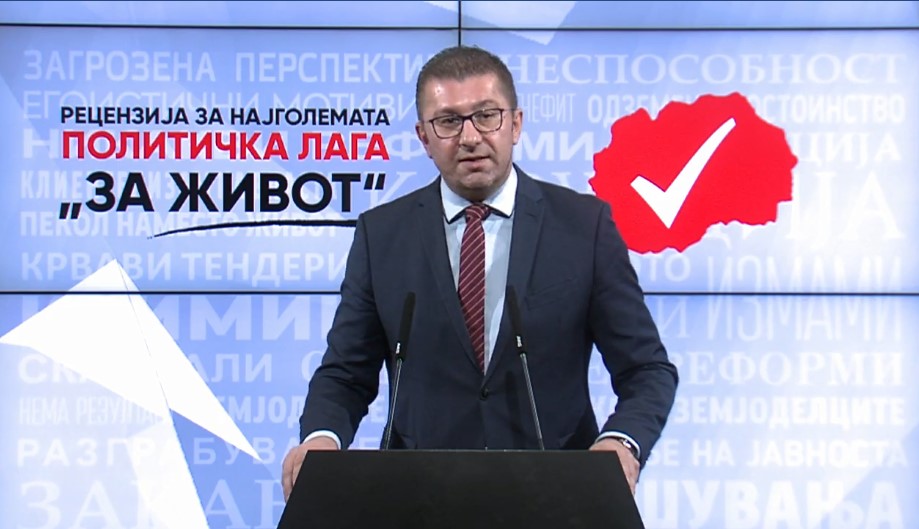 VMRO-DPMNE President Hristijan Mickoski called on the outgoing Prime Minister Zoran Zaev to accept the findings of the Venice Commission, which identified serious defects in the bilingualism law, which Zaev is using to turn Macedonia into a fully bilingual state, with the Macedonian and Albanian languages in official use.

Mickoski said that VMRO-DPMNE found the law to be unconstitutional and initiated a procedure before the Constitutional Court, and is now proposing amendments that can alter it remove its deficiencies.

A year and a half ago VMRO-DPMNE began a procedure to evaluate the constitutionality of the law. Now the Venice Commission confirmed our position that it is unconstitutional. This is a newfound situation and we will propose amendments that will bring the law back in line with the Constitution. We are also reminding the Government that one of the key positions in the French non-paper on EU enlargement prepared by President Macron is that EU candidate countries need to follow the recommendations of the European institutions and other relevant factors such as the Venice Commission. Anything less drags us away from the road to Europe, Mickoski said.

Mickoski accused Zaev of trying to win votes from ethnic Albanians with populist, unprincipled decisions such as this law.

All of his violations are now coming home to roost. Playing the populism card can brings nothing good to our country. We call on Zaev to avoid going into populism again and to make unrealistic nationalist romantic promises. Instead, we call on Zaev to support our amendments for changes to the law on the use of languages which will make it constitutional, Mickoski added.

The main point where the law violates the Macedonian Constitution is the clause making the whole of Macedonia bilingual. According to the Constitution, minority languages can only be used in official capacity in municipalities where the given minority constitutes more than 20 percent of the population.