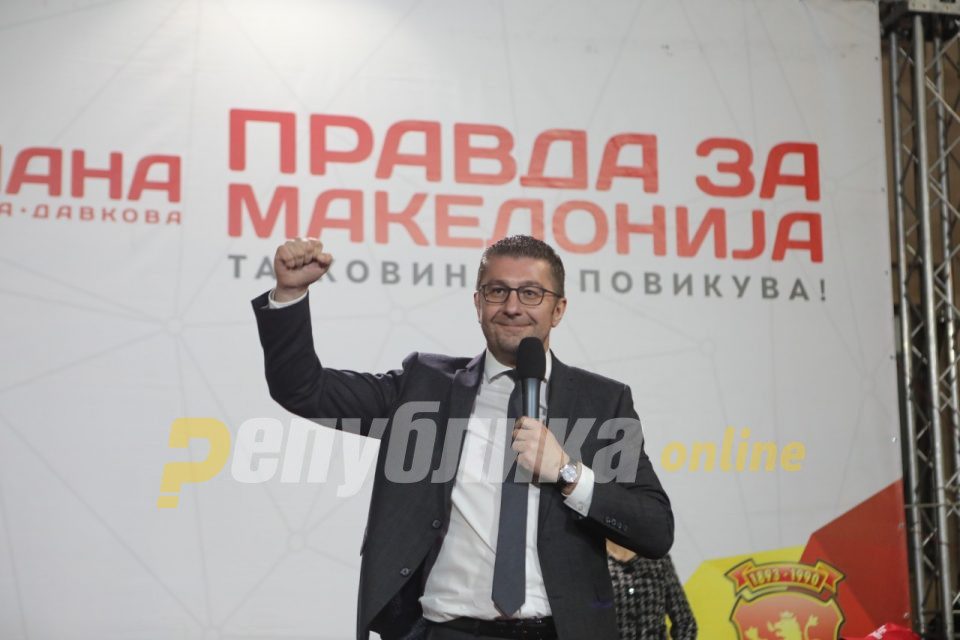 VMRO-DPMNE President Hristijan Mickoski said that the outcome of the presidential elections has left the Zoran Zaev Government without legitimacy and shows that VMRO is the largest political force in the country.

VMRO candidate Gordana Siljanovska – Davkova lost the election by about 60.000 votes, but the opposition party fought alone against the coalition of SDSM and DUI, additional more than 30 parties and the power of the state apparatus.

They placed the VMRO members under political persecution. They froze our party property. They deprived us of the public funding that is lawfully ours. They threatened us and our close ones. But, we worked and together with professore Gordana Siljanovska – Davkova we reached 380.000 votes. VMRO is the root of the Macedonian citizens and they can’t erase us, Mickoski said.

The opposition leader pointed out that if these were general elections, VMRO would have easily been the largest party, given the motley coalition that came behind Pendarovski. He also pointed out to the map of the country, where VMRO won 43 municipalities, including an overwhelming majority of ethnic Macedonian municipalities. It was only due to a near unanimous voting for Pendarovski in the Albanian municipalities that SDSM came close to being competitive. Mickoski read out the long list of cities, Skopje districts and smaller municipal towns where VMRO won, often overturning the winning results SDSM alone scored just two years ago.

This is the result of unscrupulous bargains they struck. We know the promises Zaev made to make this happen. They know what awaits them from now on. That is why they had such sour grins on their faces. They know that VMRO-DPMNE is the largest political force in the Republic of Macedonia. The map is red. That is the color of victory, the color of the people, the color of VMRO, Mickoski said.

Mickoski qualified the overt bribery in poor Roma neighborhoods and the election day intimidation of opposition activists by the police as electoral engineering and fraud. He expressed his gratitude to Siljanovska, a soft spoken international law professor, who he said showed decency and moral values unseen at the other side of the political divide.