Police had to intervene to separate one of the leading media supporters of Zoran Zaev and his SDSM party, Sashe Ivanovski, from his wife during a heated argument on Thursday evening in which knives were also involved. The couple’s five year old son witnessed the fight and was extremely disturbed when the police arrived at the scene.

Ivanovski is known for his daily dose of insults and threats aimed at critics of Zoran Zaev and of his uncritical worship of the Prime Minister. Even SDSM supporters criticized him on the occasions when he would publicly rejoice over the deaths of several opposition activists. 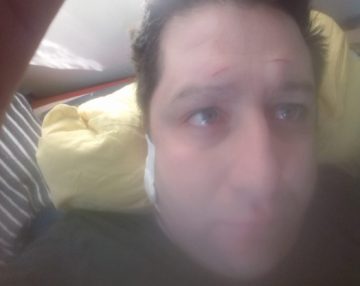 After the incident, Ivanovski published a picture of himself with a bandage on his ear, and claimed that his wife was the one who attacked him first, and slashed at him with a knife. He referred to her as his “now ex wife” and claimed that the cause of the argument was jealousy.