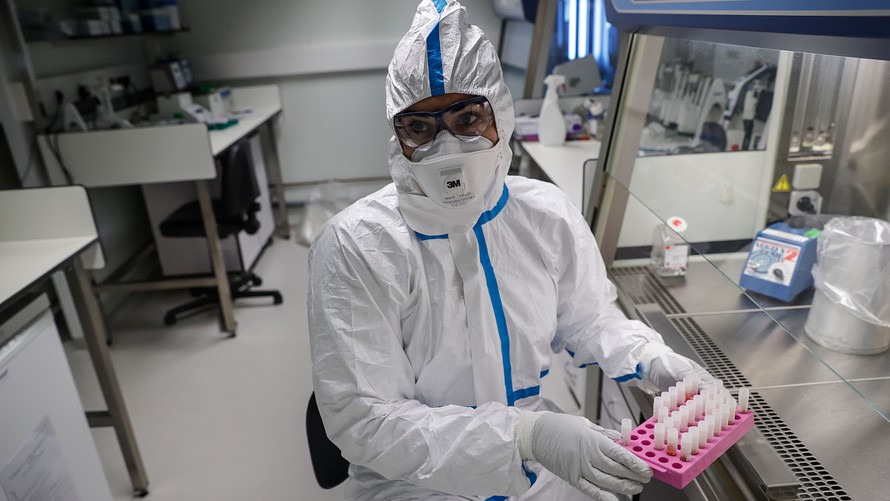 Germany has recorded at least 15,030 cases of infection with the coronavirus, with the death toll reaching 44, according to figures compiled by dpa on Thursday.

The data, based on information from the country’s 16 states, showed that the most populous state, North Rhine Westphalia, had more than 4,970 cases, followed by Bavaria with more than 2,280 and Baden-Wuerttemberg with more than 2,740 cases.

Earlier on Thursday, the Robert Koch Institute, the Berlin-based government agency for disease control, revised its official figures, confirming that the number of infections had reached almost 11,000.

Army reservists began reporting for voluntary duty, as Defence Minister Annegret Kramp-Karrenbauer said the Bundeswehr was gearing up for a lengthy deployment to combat the crisis.

“All of us have to realize that this battle against the virus is a marathon,” she said in Berlin.

As more than 2,300 reservists reported, out of the total complement of 115,000, the head of the German military, General Eberhard Zorn, stressed that the reservists had to gain the permission of their employees.

“This is not mobilization status,” Zorn said, dismissing suggestions the army would become involved in keeping order.

Kramp-Karrenbauer cautioned against exaggerated expectations, noting that the Bundeswehr and its hospitals with some 3,000 doctors made up only a small part of Germany’s health system.

The main task of the Bundeswehr thus far has been in providing and distributing medical materials.

Amid concerns that many Germans were continuing to gather in groups to socialize or take exercise, Health Minister Jens Spahn urged people to behave sensibly.

“My impression is that many want to help by staying at home,” he said, noting that the message had not got through to everyone.

“I’m relying on common sense,” Spahn said, adding that parties in the park were not how he envisioned solidarity-like behaviour.

Regarding the duration of the current measures, including closures of schools and certain businesses, Spahn said it could be up to two weeks before the effects could be seen in the statistics.

State premiers would look into how to proceed with the restrictions after Easter, Spahn said. Easter Sunday falls this year on April 12.

Police across the country reported isolated incidents of fistfights in supermarkets, as staff tried to prevent customers from buying more than one pack of toilet paper.

In Bremen in the north, 60 bottles of disinfectant were stolen from a children’s hospital, while a primary school in Nuremberg in Bavaria reported the theft of 600 normal rolls and nine outsize rolls of toilet paper, along with 20 litres of liquid soap.

Queues on the autobahn leading to the Polish border halved to 30 kilometres, as the authorities on both sides moved to calm the situation after Poland introduced border controls in response to the pandemic on Sunday.

Danish police also took measures along the country’s border with Germany to ease traffic flows. A spokesperson for Germany’s Federal Police in Flensburg near the border said there were queues of up to 4 kilometres on the Danish side.

On Wednesday, Merkel had appealed to the German public to stick to social distancing measures and stay indoors where possible in order to slow the spread of the disease.

“It is serious. You should take it seriously too,” Merkel told millions of viewers in a pre-recorded statement aired by a number of broadcasters.

Merkel’s government has held back from issuing draconian lockdown measures like those in Italy, France and Spain.

In her speech, she stressed the importance of democratic values in the face of the crisis, but appeared to warn of a stricter approach if citizens do not do their part.

“Stick to the rules that are in place for now. We will constantly reassess as a government what can still be improved, but also what may still be necessary.”