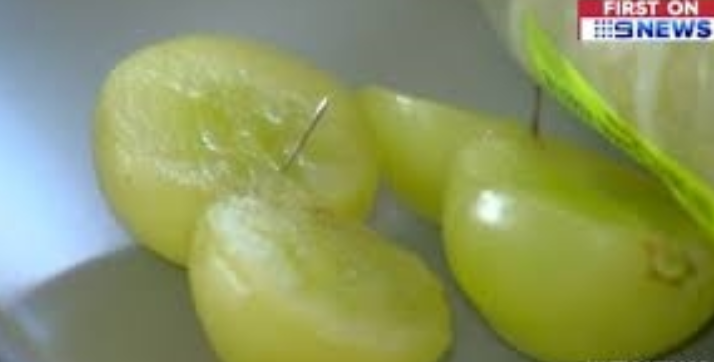 Police are investigating after Shams Alsubaiy and her partner Mr Skender Hasa told 9News in Melbourne that Ms Alsubaiy had pricked herself whilst picking up a green seedless grape.

When they cut the grapes open the couple found two needles hidden inside the bunch bought at a supermarket.

“I thank God I didn’t eat them. I’m pregnant, and I don’t want anything to happen,” Ms Alsubaiy said.

The incident is the latest case of supermarket fruit contamination in Australia, following hundreds of cases of needles found in strawberries in September 2018.

Referring to the previous scare, Mr Hasa said: “I was just shocked, scared. I thought this was all over and done with”.

Woolworths, the supermarket where the grapes were allegedly purchased, confirmed it had been alerted to the new incident.

A spokesman for the firm said: “We’re aware of the customer report and will work closely with the authorities as they investigate this matter”.

The couple have alerted police, who told 9News they are investigating the matter.

Stricter criminal penalties were introduced last year by the Australian government, increasing a prison sentence for food contamination from 10 to 15 years.

In November, a 50-year-old woman who had previously worked on a strawberry farm, was charged with seven counts of contamination. It is believed that many other cases were copycat actions.

A young boy who had admitted to hiding sewing needles inside strawberries as a prank was also arrested by New South Wales police.

Contaminated strawberries were first traced to one supplier in the northern state of Queensland, before reports of similar cases across Australia, New Zealand and Singapore.

Authorities introduced a temporary requirement for Australian exporters to prove that their fruit was free from metal contaminants.