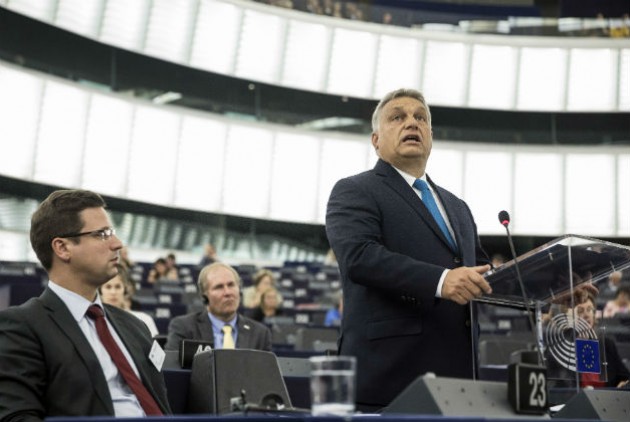 The Hungarian prime minister, Viktor Orbán, has said his ruling nationalist Fidesz party may drop out of the centre-right European People’s party (EPP) amid a row over his government’s anti-Brussels media campaign.

One of the reasons why Fidesz has faced opposition from its erstwhile partners relates to a series of ads and posters featuring European Commission President Jean-Claude Juncker and Hungarian-American billionaire George Soros. The caption below the pictures of the two suggests that they encourage illegal migration to Europe. That’s why 12 parties from nine countries have asked EPP President Joseph Dole, to vote on the fate of Viktor Orban’s party in the European family of conservative parties.

Speaking to public radio, Orban said he would still prefer to reform the EPP, swinging it towards an anti-immigration platform, but also raised the prospect of Fidesz quitting the EPP, which will meet on March 20 to discuss the matter.

The debate may end up with Fidesz finding its place not within but outside the People’s Party,” Orban said in an interview. “If we need to start something new … then obviously the first place to hold talks will be in Poland, noting that Poland’s ruling Law and Justice (PiS) party is not a member of the EPP.

He said he talked with both Juncker and Weber on Thursday and on Sunday he planned to visit Poland, a major regional ally. Polish Prime Minister Mateusz Morawiecki will visit Budapest on March 15.

Over the weekend Hungarian Prime Minister Viktor Orban said individuals calling for his party to be expelled from the center-right group in the European Parliament were “useful idiots” for the left. “While they believe they’re fighting in a spiritual struggle, in fact they’re serving the power interests of others — indeed, of our opponents,” he told German newspaper Welt am Sonntag.