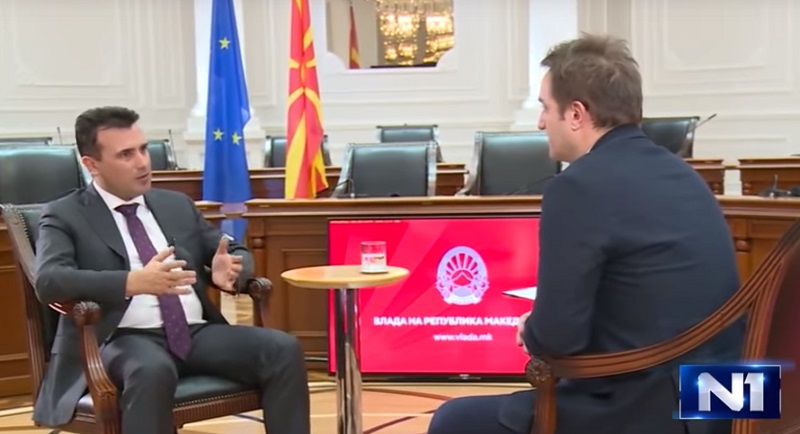 Prime Minister Zoran Zaev provided some much needed comic relief with his long form interview for the Bosnian N1 TV. Speaking in a unique mixture of Serbo-Croato-Bosnian-Macedonian, Zaev expanded on politics, the economy, culture, daydreamed about Yugoslavia, and left editors scrambling which soundbite to use first.

When somebody travel to Sarajevo or Belgrade, you could sleep wherever you want. Nobody touch you – only brotherhood and unity. We are brother nations on territory of former Yugoslavia. I respect that. I loved Yugoslavia and I dream to be together again. We unite in European Union, Zaev told N1 in a display of what is usually called Yugonostalgia.

Still, mindful of the obligations under the treaty with Bulgaria he signed, which stipulates that Macedonians share their history with a non-Yugoslav nation like Bulgaria, Zaev expanded on this other historic venue.

Probably historians will determine what historians already see in the Committee with Bulgaria that Cyril and Methodius are shared, they work together in Ohrid, in Sofia, in everywhere, in Moravia, they go everywhere, Zaev said about the on-going process of determining which historic figure belongs to whom.

On the more substantial issues, Zaev insisted that the name issue can be resolved without a United Nations Security Council resolution, apparently to avoid a Russian veto.

As if the renaming issue was not complicated enough explained in a mixture of Balkan languages, Zaev said that the official signs he ordered with the name “Republic of North Macedonia” will be in Albanian as well, while road signs will be in Macedonian, English and French but also in Albanian in municipalities where Albanians amount to more than 20 percent of the population.

Visibly amused by his host, the N1 journalist asked Zaev how did the first bilingual session of his Government looked like.

You put headset and you talk, Zaev said, before acknowledging that after a few exchanges in Macedonian and Albanian, all Albanian ministers continued talking in Macedonian. “You realize that when citizens of Albanian ethnic community need to express better, to make point, then they talk in their native language. But when they need to persuade all other, they be practical”, Zaev said laughing.