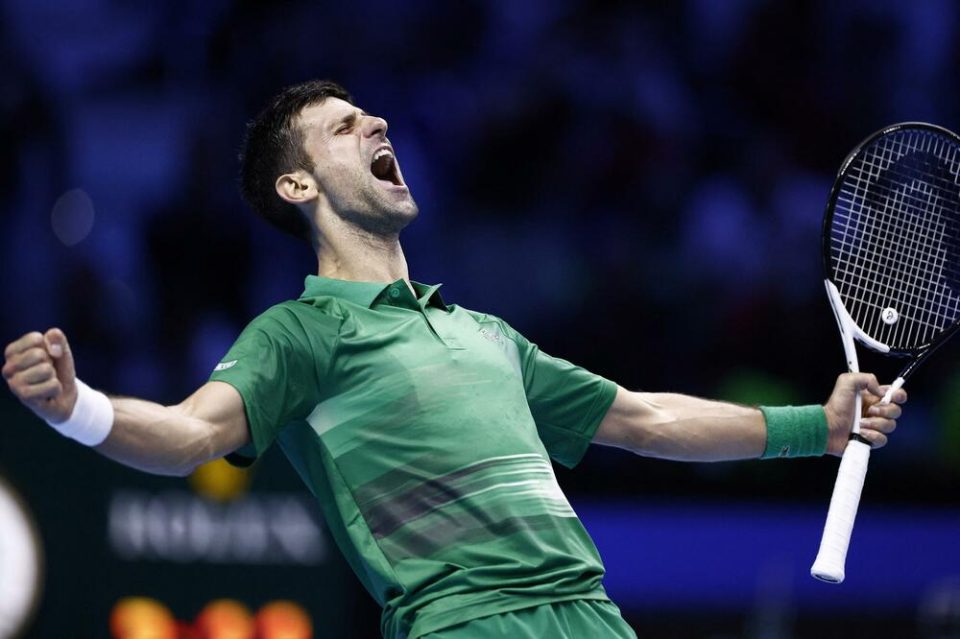 Novak Djokovic ended his “roller coaster year” on a roaring high with victory at the ATP Finals, matching Roger Federer’s record of six titles by sinking the hopes of Casper Ruud.

The Serbian said he had spent the season “on the needles”, his colourful way of describing the nervousness and discomfort he had experienced during a campaign which saw him prevented from playing in Australia and North America.

Djokovic, who has refused to take a COVID-19 vaccination, has seen his career suffer because of that firm stance. He was thrown out of Australia in January, a humiliating way to begin the year.

Yet there is little doubting the 35-year-old remains the pre-eminent player on tour heading towards the 2023 season, even with the rise of Carlos Alcaraz, who ends the year as world number one.

A first ATP Finals triumph for Djokovic came in 2008, and he then won four in a row from 2012 to 2015, and now he has carried off the trophy once more, plus a cheque worth $4.74 million, the biggest prize ever paid out in tennis.

“Seven years, it’s been a long time. At the same time, the fact I’ve waited seven years makes this victory even sweeter and even bigger,” Djokovic said.

Speaking on Amazon Prime, Djokovic said the win after all he has gone through felt “huge”.

“I probably talked about this season and how unusual it is 1,000 times prior to this interview, so I’m not going to repeat what most people who follow tennis know,” he said.

“[It’s] just a big relief and satisfaction, and also I look forward to having a couple of weeks off, because I’ve been on the needles the entire year, whether for tournaments or waiting for permissions to go somewhere, so I’m really glad I managed to end it in a positive way.”

He is the oldest champion in the tournament’s 53-year history, breaking a record held by Federer, who was 30 when he won in 2011.

Djokovic said it was “really, really impressive” for Ruud to have reached grand slam finals in Paris and New York, and the ATP Finals title match, in a stellar year for the 23-year-old Norwegian.

But Djokovic was ruthless in Sunday’s final, emerging a 7-5 6-3 winner thanks to a break of serve in each set, earning a fifth title of his disrupted year following wins at Wimbledon, Rome, Astana and Tel Aviv.

Serbian superstar Djokovic had two chances to break in the second game but Ruud resisted, and the younger man saved another break point in the eighth game too, but a further opportunity came at 6-5 after Ruud paddled a backhand into the net. The 23-year-old Norwegian sent the ball long in the next rally to slip behind.

It was becoming a masterclass from Djokovic and he was pummelling the ball from the back of the court, breaking Ruud’s serve for a 3-1 lead in the second set. Djokovic later won a 36-shot rally to set up championship point, sealing victory with an ace down the centre.

Thanking his team and supporters during the trophy presentation for “going through some tough times” with him, Djokovic said there were moments where he had needed “a shoulder to lean on, a shoulder to cry on”.

The 21-time grand slam winner added: “It’s been a roller coaster year really, something I’ve never experienced ever before in my life, and only we know what we’ve been through.”