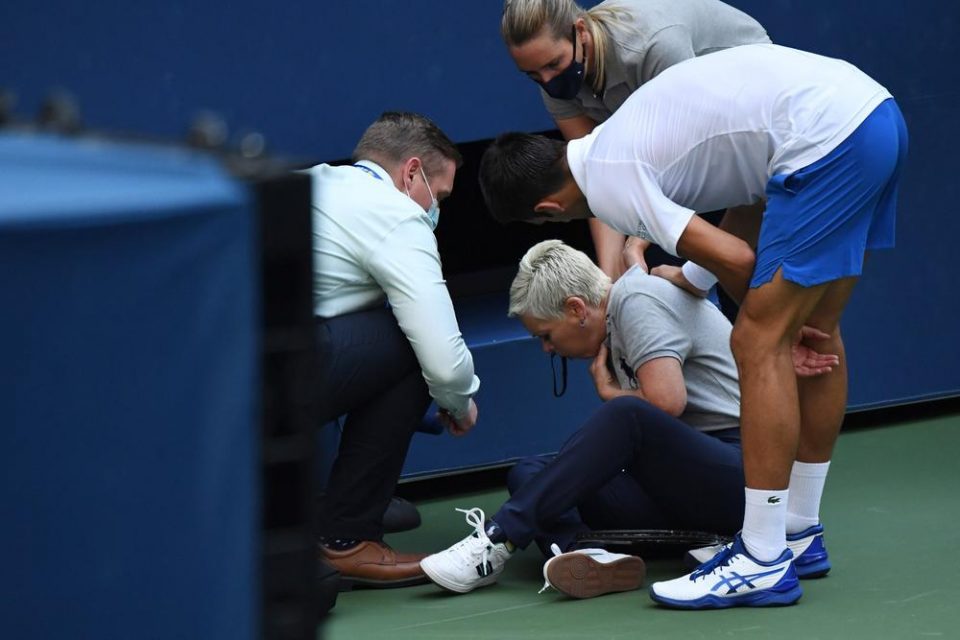 Novak Djokovic‘s US Open campaign came to an abrupt end in stunning fashion as he was disqualified for hitting a line judge with a ball during his fourth round against Pablo Carreno Busta on Sunday.

The Serbian world number one had fallen to the ground minutes earlier and received medical treatment to his left shoulder mid-game at 5-5.

Carreno Busta broke his serve upon resumption of the game and Djokovic angrily struck the ball with his racquet behind him towards the backboard, where ballpersons are usually standing next to the line umpires.

The ball accidentally hit a female line judge in the neck, who fell to the ground gasping as a result.

After lengthy deliberations between the tournament supervisor and officials, Djokovic was defaulted from the match in accordance with the rules.

Djokovic was the outright favourite for the US Open title and had been undefeated this season, with a sweeping 26-0 win-loss record.

His disqualification means the men’s field will crown a new grand slam champion for the first time since 2014 when Marin Cilic lifted the trophy at the US Open.

Djokovic did not address the press immediately after the incident and it is unclear whether he will.

But German fifth seed Alexander Zverev was in the interview room moments after Djokovic’s default and was shocked by what had just transpired.

Zverev, who won his fourth round 6-2, 6-2, 6-1 over Spaniard Alejandro Davidovich Fokina earlier at the Louis Armstrong stadium, agreed with the officials’ decision.

“It’s unfortunate. He hit a ball, he hit a tennis ball. It’s very unfortunate that he hit the line judge, and especially where it hit her,” said the 23-year-old.

“There is a rule in place for it. I think the supervisors and all of them are just doing their job. But, yeah, very unlucky for Novak.”

Zverev is through to the fourth grand slam quarter-final of his career, and first in New York, where he awaits the winner of the clash between Borna Coric and Jordan Thompson.

The young German was slated to potentially face Djokovic in the semi-finals and now realizes the golden opportunity at hand.

“There’s going to be a new grand slam champion. That’s all I know right now,” said Zverev, whose best showing at a major came at the Australian Open last January when he made the semi-finals.

“There’s no past grand slam champions left in the draw. It’s going to be one of the young guys, I think, if you count Dominic Thiem as a young guy, as well. He obviously has a chance to win, as well.

“Now I think is the time where it gets really interesting. I know who is where in the draw. I know who I can play. I know who the rest of the guys can play. We’ll see where we go from here.”

Over on the women’s side, Jennifer Brady became the first former collegiate player since 1994 to reach the women’s quarter-finals at the US Open, thanks to a 6-1, 6-4 rout of 2016 champion Angelique Kerber.

The American No.28 seed is through to the last eight for the first time at a grand slam and next plays Kazakhstan’s Yulia Putintseva, who upset eighth seed Petra Martic 6-3, 2-6, 6-4.