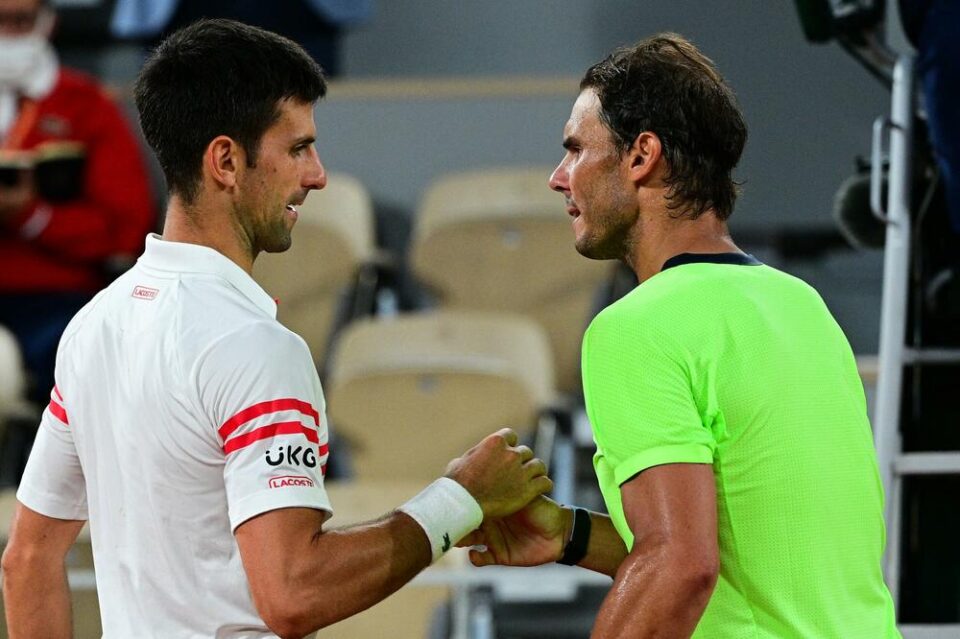 Sixteen years after their rivalry began with a Roland Garros quarter-final, Rafael Nadal and Novak Djokovic will do battle again in the last eight of the French Open.

Nadal promised he will be “focused” for the big occasion, set to come on Tuesday, while Djokovic said he was ready for “a physical battle, along with everything else”.

They could hardly have had more contrasting wins to set up that eagerly awaited match, however, with Djokovic enjoying a 6-1, 6-3, 6-3 Sunday stroll past Diego Schwartzman, before Nadal was pushed almost to his limit by Felix Auger-Aliassime, scraping a 3-6, 6-3, 6-2, 3-6, 6-3 victory in four hours and 21 minutes.

Now Nadal and Djokovic can prepare for centre stage. The illustrious pair have never collided as early as the quarter-final stage at any other grand slam, but their clash in Paris will be a third such last-eight clash at the French major.

All matches considered, it will be a 59th career meeting, with Djokovic up to now holding a 30-28 lead in the head-to-head.

Nadal leads 10-7 in their grand slam matches, however, and has a 7-2 record in their Roland Garros past encounters, albeit losing the last of those in last year’s semi-final.

The very first match between the pair came at Roland Garros in the 2006 quarter-finals, when Djokovic retired at 6-4, 6-4 behind, giving up due to a back injury during the first game of the third set.

Djokovic called the upcoming reunion “a well-anticipated match”, and he was delighted to get the job done quickly against an overwhelmed Schwartzman. The world number one has yet to drop a set in four matches in Paris, and that follows on from his triumph at the Internazionali d’Italia in Rome where he raced to the title without dropping a set either.

Assessing the Nadal prospect, Djokovic said: “I’m glad that I didn’t spend too much time on the court myself up to the quarter-finals, knowing that playing him in Roland Garros is always a physical battle, along with everything else.”

The “everything else” element of that may mean the feverish backing that Nadal is likely to receive, but Djokovic wants his tennis to do the talking.

This is a first match of the year between Djokovic and Nadal. They have played each other at least once every year since that 2006 first encounter.

Nadal is one ahead of Djokovic on the all-time list of most grand slam titles, having won the Australian Open in January when Djokovic was prevented from competing to move to 21 major successes.

Booing broke out when Djokovic’s name was mentioned in Nadal’s post-match on-court interview, an early indication that the record 13-time French Open champion will have the crowd’s support.

“Of course we know each other well. We have a lot of history together,” Nadal said. “He came here after winning Rome, and for me it has been not the ideal situation to arrive here.