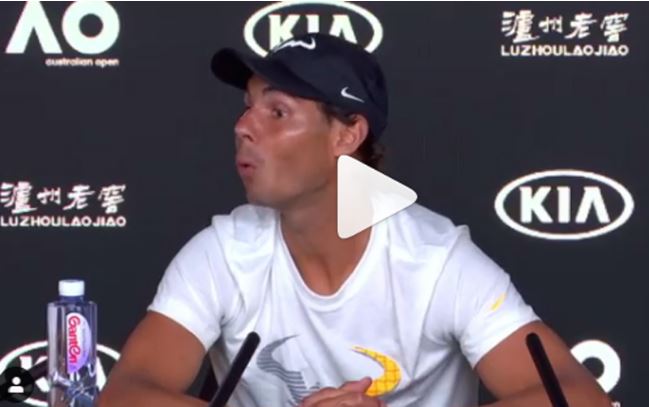 Rafael Nadal stopped his Australian Open press conference to wake up a journalist who fell asleep this morning.

Nadal battled past James Duckworth in his opening match with a 6-4, 6-3, 7-5 victory, express.co.uk reports.

The Spaniard is hoping to put recent injury woes behind him with a strong showing in Melbourne over the next fortnight.

In his post-match press conference, Nadal spoke of how his change in serving technique is beginning to bare fruits.

But one journalist, who is well acquainted with Nadal, nodded off and the world No 2 could not resist a light-hearted dig at his dear friend.

“It is not interesting today,” Nadal joked as he pointed out the snoozing reporter.

“He is closing his eyes to be more focussed on what I am saying.”

Nadal continued with press conference where he explained how he still struggles with minor pains.

“It was sad not to play in Brisbane,” he said.

“I had a small issue on the leg and the doctor wouldn’t allow me on court even if I wanted.

“It’s always different pains appearing in the first weeks back after a while.

“I am trying to be better and better every day. I had a good week of practice before this tournament.”

However, he was happy to book his place in the second round.

“So that’s an important victory because it is the first victory since a while, and at the same time, because that gives me the chance to be on court again. And that’s what I need today.

“When I get broken was not because of the serve.

“I played against a super-aggressive player.

“Believe me, he went on court probably doing a thing that works well for him, and it gave him some chances – he played smart and he played well.”