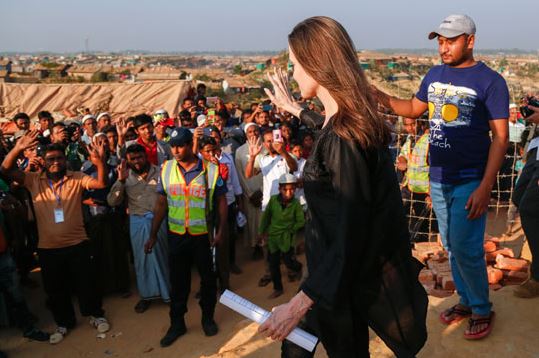 “They have an absolute right to return home, but only when they feel safe enough to do so voluntarily, and they know that their rights will be respected,” Jolie said to journalists after visiting refugee camps in Cox’s Bazar district of south-eastern Bangladesh.

The Rohingya cannot return to Myanmar yet since there has been very little progress on the ground to prepare for their arrival, she said.

The 43-year old US actress arrived in Bangladesh on Monday on a three-day visit as a special envoy of the United Nations High Commission for Refugees (UNHCR).

More than 700,000 Rohingya Muslims crossed into Bangladesh after the Myanmar military launched a violent crackdown on suspected insurgents in August 2017.

The UN termed the operation a textbook example of ethnic cleansing.

“The responsibility to ensure those rights and make it possible for the Rohingya people to return to Rakhine State lies squarely with the government and the authorities in Myanmar,” Jolie said.

Jolie urged Myanmar to show genuine commitment which would see an end to the violence and displacement, and improve the conditions for all communities in the troubled Rakhine state.

The actress also called for accountability of those responsible for human rights violations.

Brad Pitt and Angelina Jolie back together?