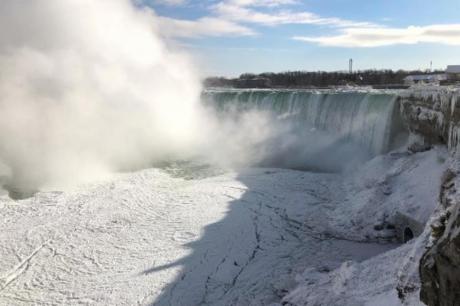 The rushing waters of Niagara Falls were partially frozen over amid a major winter storm that blanketed parts of the U.S. and Canada in snow over the weekend.

Visitors to the Falls on Sunday were treated to the rare and beautiful sight, which spectator Emma Grafham compared to a scene from the Disney movie “Frozen.”

“There was even this set of stairs that were placed just outside the look-on spot and they had so much ice on them, it looked like Elsa had just cast her arm out and summoned up some stairs like she does in the movie,” she told CNN.

Earlier in the weekend, the powerful storm blanketed most of the Midwest with snow before barreling toward the Northeast on Sunday, ushering in dangerously frigid temperatures expected to continue through midweek.

Hundreds of flights scheduled to leave airports in the region, including Boston’s Logan International Airport, New York’s John F. Kennedy International, Reagan National in Washington and Newark Liberty International in New Jersey, on Sunday were canceled as a result of the storm, the Associated Press reports.