A frequent pre-election promise by ethnic Albanian parties in Macedonia, often discreetly made, goes like this: “vote for us and you’ll never have to pay electricity again”. Electricity bills evasion is a significant problem in parts of Macedonia, often those which are majority Albanian, although Macedonian, Roma and other districts also have an issue with this – Prime Minister Zoran Zaev’s father, after all, was charged with unlawfully tapping into an electricity line in 2011 and 2012 and using power worth almost 2.000 EUR.

In this environment, the announcement made by Zaev’s Government that it will negotiate with the Austrian owned EVN distribution company and the Macedonian state owned ELEM energy producing company to write off old electricity bills worth 110 million EUR caused outrage. Citizens who pay their bills regularly were complaining online and in the popular TV call in shows that they are taken for fools. The complaints often divide commentators along ethnic lines, with Macedonians blaming Albanians of not paying their bills.

Former EVN employees shared testimonies on Facebook describing the mass evasion in Albanian areas of the country such as the village of Aracinovo near Skopje, and the busy market areas of Bit Pazar and Plasticarska in the downtown area.

Nobody pays the electricity bills. “Loss of power” amounts to 65 percent, one of them described, using the technical term EVN has resorted to describe electricity stolen from its distribution system.

EVN attempted to force violators to pay their bills, including with new measuring stations which would be placed at a secure location, instead of the current devices which are inside the homes, where homeowners often forcefully order EVN agents to stay away.

We were supposed to have the measuring stations removed outside of the houses and we promised the local Albanians that if they allow this, they will have a two year grace period in which they won’t have to pay their bills. But, they continue as they did before. If we try to cut power to the area, they break our stations. EVN asked the state to intervene and help, which it is supposed to do anyway. But, unable to force the users to pay, the Government allows EVN to declare up to 14 percent of all distributed power as “lost” through the power lines, even though in all normal countries technical loss amounts to no more than 8 percent. Additional 6 percent of the stolen electricity is paid by ELEM and MEPSO (state owned production and distribution companies), meaning we the citizens pay for it, one of the former EVN employees wrote online. 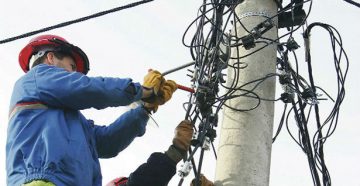 Former attempts by EVN to force collection have often gone badly for the company. In 2010 one of their agents was killed on the John Kennedy boulevard in Skopje’s Cair district, after he had cut off a user who refused to pay his bills from the electricity network. In rural areas agents often don’t even try entering the homes and checking for illegal connections or tampering with the measuring devices.