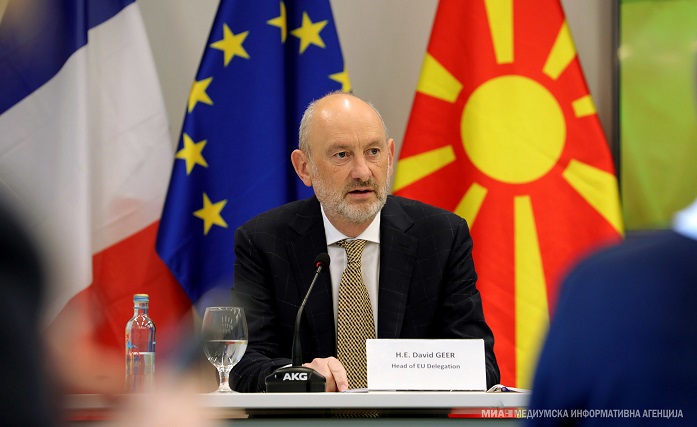 The Government has been ambitious in saying the country will join the European Union in 2030. The achievement or failure to achieve this ambitious decision will depend on our efforts. EU accession should be a national project and the entire political spectrum should invest in the national interest of EU reform implementation, whereas judiciary reforms are urgently required, EU Ambassador David Geer told the fifth plenary session of the National Convention on the European Union (NCEU) in Macedonia on Thursday.

This does not mean that the opposition should stop working, its role to review policy issues is vital, but there must be a certainty that the country will continue on its path towards EU accession with the same step of implementing reforms regardless of which Government is in power, said Geer.

He emphasized that after waiting too long, the country finally opened the accession negotiations on July 19 and started the bilateral screening regarding the application of European practices, determining the gaps in the legislation, which should determine what still needs to be done, and who should do it., do we have the capacities and who will implement and apply this legal framework. The good news is that screening is going well, but also that the accession process is a national project.

Accession to the EU, he emphasized, should be a national project that the Government should lead, and in which process all citizens, the business community, and civil society should be involved, as well as the mobilization of all the state’s resources. This process of transformation of the country means the implementation of reforms on the ground without which the benefits of membership cannot be reaped, and without commitment to reforms, the accession process cannot progress, Geer said.

He also emphasized the role of the National Council for European Integration in the reform process, which he said should be prepared for long days and nights because it should lead the essential process. He highlighted, among other things, the role of local authorities, because 70 percent of the implementation of EU laws falls to local communities, but also to the media, which, according to him, have a special responsibility to be informed in order to inform based on the highest ethical and professional standards.

Geer: Nice words are not enough in the fight against corruption, citizens expect results