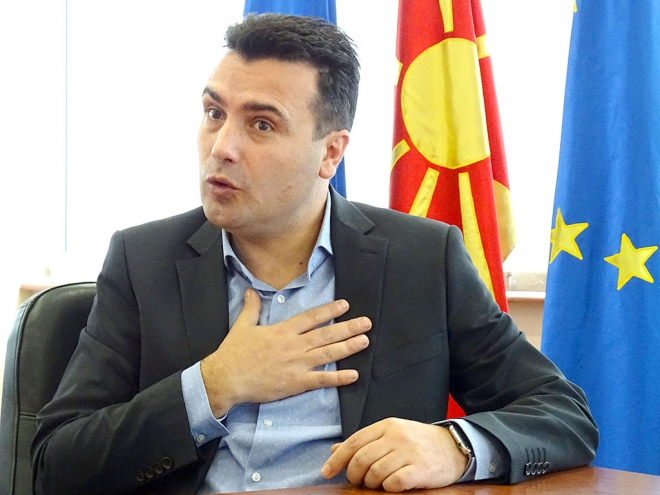 The violent way in which Zoran Zaev is trying to smuggle his law on state prosecutors through Parliament confirms that his intent is to avoid his own responsibility for the many scandals, crimes and affairs which are linked with him. Zaev is understandably afraid that he wil lose the elections and he is forcing an unconstitutional law just two days before the Parliament is supposed to be dissolved, against the opinions and recommendations of legal experts, just to save his own skin, said VMRO-DPMNE President Hristijan Mickoski during a press conference today.

Media outlets linked to Zaev’s SDSM party reported yesterday that he has the 81 votes needed to push the law through Parliament, amid reports that members of Parliament are being bribed with public jobs for family members, but also with pardons for criminal cases that prosecutors linked to Zaev filed against them. But today two opposition ethnic Albanian parties say they oppose the law, as did one non-aligned member of Parliament who is pressured using criminal charges against her.

Mickoski listed the serious objections VMRO has about the law, including the attempt to make the prosecutors Zaev appoints now very hard to replace, and the attempt to stop prosecutors from using their signature move over the past several years – filing charges against Zaev’s political opponents using wiretaps – against Zaev.

This law would enthrone Ruskoska, Jovevski, and other of Zaev’s henchmen in their offices – the law provides they can only be replaced with two thirds of the votes in the Council of Prosecutors, and given the control the SDSM party has over the Council it would make them irreplaceable. Zaev needs Ruskoska and Joveski to do his bidding, and to allow him to grant selective amnesty and pardons for criminals, Mickoski said.

Mickoski said that article 110 of the PPO law would prevent the use of wiretaps and video recordings that reveal Zaev’s crimes in the racketeering scandals as evidence before the court. This includes the two Racket cases, the Leonardo scandal where Zaev’s Secretary General Raskoski was recorded deciding the outcome of the procurement contract for air traffic equipment and other cases of high level corruption.

The European Court of Human Rights states that such recordings, which are in the public interest, can be used as evidence in court proceedings. That is our position. We call on the other political parties to join us on this issue. If the recording is in the public interest it should be part of the proceedings. If the so-called “bombs” apply to some, they should apply to all, and especially to Zoran Zaev, the leadership of his party and his lieutenants, Mickoski said.

Zaev was pardoned in 2008 for corruption, and in 2017 he received a not guilty verdict over a near identical case of corruption he perpetrated as Mayor of Strumica. His ally, former Special Prosecutor Katica Janeva, dropped charges against him for his role in abusing the surveillance systems for wiretapping political opponents. Prosecutors are currently working overtime to ensure the Racket trial, where Janeva is charged with extorting millions from businessmen, doesn’t lead in his direction.