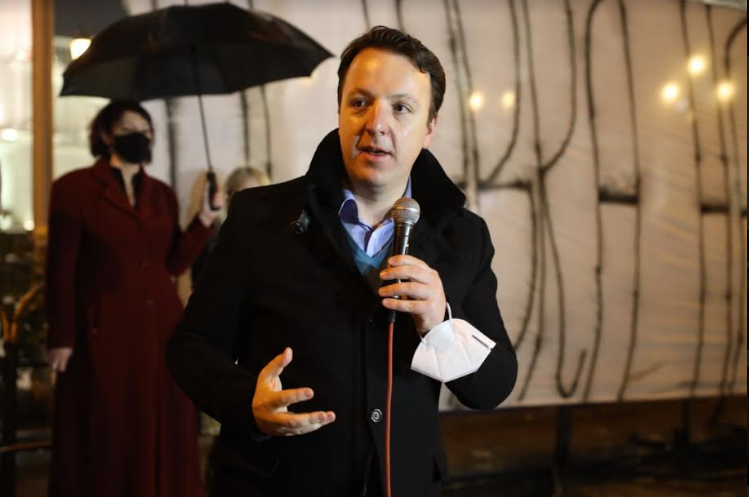 VMRO-DPMNE Vice President Aleksandar Nikoloski said that the 20 days of non-stop protests against the Zaev regime have already had an effect, noting that Zaev, in his scandalos BGNES interview, announced that he will accept all Bulgarian demands, but hasn’t done so.

Be proud of yourselves. A small step has already been made. Zoran Zaev and his treasonous crew were ready to dismantle Macedonia last week. They were prepared to sign their capitulation, a document which no Macedonian would ever sign. But, thanks to you, who came out in the cities and the towns and villages, there was no signing ceremony. They are scared of the Macedonian people. Let’s remain united and we can win this fight, Nikoloski told the protesters gathered this afternoon in front of the Government building.

Zaev faced both protests, a major rift in his SDSM party where former leader Branko Crvenkovski is calling for his ouster, and grumbling from coalition partners which he can’t ignore, given that he only holds 62 seats in the 120 seat Parliament.

This is just the beginning. They will try again, in a week or two, or, as Zaev now says, after the March elections in Bulgaria. That’s why we need to remain vigilang and spread the spirit of these protests. As Boris Sarafov, the VMRO leader who was well received all over the courts of Europe, used to say, we are neither Greeks, or Bulgarians or Serbs, but simply, Macedonians. It is up to us now to defend this pledge from Sarafov, given 120 years ago, Nikoloski said.

He repeated his call for an immediate resignation from Zoran Zaev and his Government, insisting that Bulgaria would’ve never gone this far and made such outlandish demands from  Macedonia, if it weren’t for Zaev and his clear willingness to accept any demand. “His policy is one of the reasons why Macedonia won’t open EU accession talks now. Bulgaria is now hoping to gain something that it fought for for 150 years, and that is the fault of Zaev, Nikola Dimitrov and Sekerinska. The other is the huge level of crime and corruption, as seen in the Racket scandal which showed that Zaev is capo di tutti capi of an organized scheme to extort money from businessmen. He is at the top of a pyramid of crime and corruption and that is why we need his resignation, now before it is too late”, Nikoloski said.