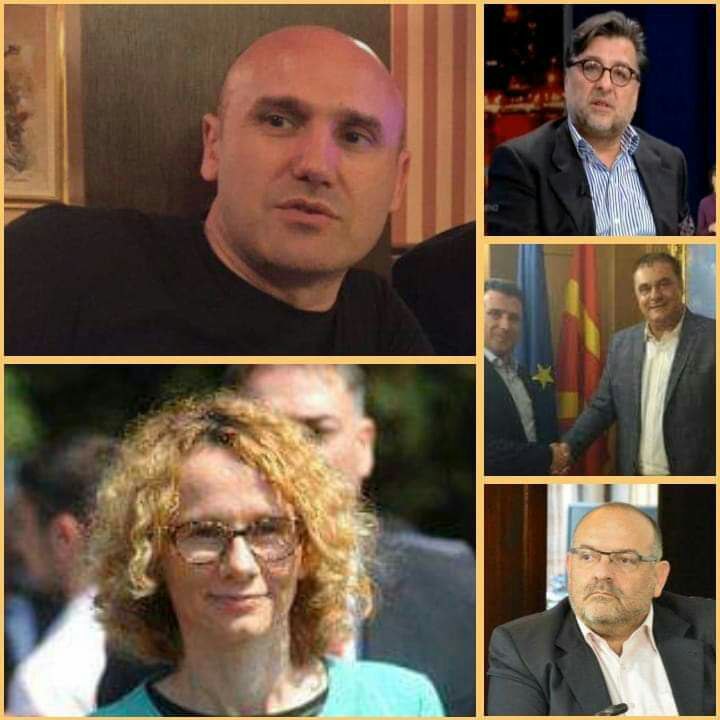 Macedonian public showed little patience to play the guessing game over the latest revelations involving the Racket scandal. Journalist Branko Geroski published a report alleging that five persons who are very close to the former Prime Minister Zoran Zaev. As usual, for legal purposes Geroski did not use the actual names of the people he is pointing out, but gave enough details about them to make them easily distinguishable. These were a female close associate of Zaev who is a top SDSM party official, a business dealer who is very close to Zaev, a foreign citizen who advises Zaev and so on.

We are talking about a very close, associate of Zaev, a woman from the leadership of the SDSM party. A very close adviser of Zaev’s from a foreign country. A known intellectual and a well known person from the 1TV television who helped link up Boki and Katica. And worst of all, a man who is very close to Zoran Zaev, who manages all major business deals in this country. The one outstanding question is whether this entire operation was managed with Zaev’s permission, or if Zaev was merely “manipulated”, Geroski wrote in his article.

Commentator Aleksandar Pandov today went ahead and named the five. The female associate and SDSM party official? It’s Radmila Sekerinska, says Pandov. Energy and media mogul from Serbia Zoran Basanovic, who is Zaev’s adviser, is named as the organizer of the 1TV television which was used to blackmail and threaten businessmen into paying extortion money. Pandov adds that journalist Saso Ordanoski, who worked in 1TV and remained the most loyal of its line-up to both Zaev and now charged Special Prosecutor Katica Janeva, is another of the gang of five. The “professor” or “intellectual” as Geroski called him, is Ljubomir Frckoski – former SDSM appointed Interior Minister during the murky 1990ies and the party’s failed presidential candidate in 2009 whose wife Irena defends disgraced Special Prosecutor Katica Janeva in the Racket scandal. And finally, the fifth person, Pandov says, is obviously Vice Zaev, Zoran Zaev’s brother and business consigliere.

The naming of Vice Zaev is easily most damaging for Zaev personally, since it’s difficult for the former Prime Minister to deny his direct link with the scandal. Vice Zaev was famously named in the 2015 video in which Zoran Zaev is seen seeking several hundred thousand euros in bribes from a Strumica businessman and instructs that half of the money is left with Vice, in his money changing shop.

Earlier on Saturday, before Geroski published his report, Vecer reported that a lengthy new testimony given by extortion accomplice Bojan Jovanovski – Boki 13 directly pointed to Vice Zaev. In the testimony Boki 13 allegedly gave in mid December, he revealed that he gave the bulk of the seven million EUR he was able to extort to Vice Zaev, during meetings in a Skopje shopping mall.

Vecer: Boki 13 testified that he gave millions of euros to a close relative of Zoran Zaev

Most importantly, Vecer reports, Boki 13 finally revealed details about the flow of the money. He allegedly testified that he gave most of it to people close to Zoran Zaev, including a very close relative of his. Boki 13 revealed details, such as the location where the meetings and the delivers too place. More recently, after he got charged, Boki 13 began receiving threats from this close relative of Zoran Zaev, who was pressuring him not to talk to the prosecutors, Vecer wrote.

Both Boki 13 and other defendants, such as top SDSM party official and Deputy Parliament Speaker Frosina Remenski announced their willingness to “sing” and possibly avoid having the full brunt of the scandal break exclusively over them. Remenski even openly called out the newly appointed Interior Minister Nake Culev and said she hopes he will be open to discussing things with her.

I expect to have good cooperation with the new Interior Minister, who may show good sense and for some issues that were raised in the recent past, and hopefully we will see that the opposition will operate professionally and in accordance with the law, Remenski said, in a statement given on Friday, just as Zaev was submitting his resignation to Parliament.

Few of the “gang of five” decided to address the allegations. Sekerinska had the husband of her PR adviser spread allegations against Geroski on Twitter. Ordanoski announced that he will speak his mind on Monday morning. Over Facebook, he wrote to Geroski, asking him whether the text is meant to allege that he, Ordanoski, is involved in the Racket scandal. Ljupco Zlatev, an investigative journalist wrote reported extensively on the scandal, quickly assured Ordanoski that it’s probably some other person who worked in 1TV – “maybe it’s Slavco, the weather guy”, in an ironic comment which quickly got more than 250 likes – a clear indication of where the pulic sentiment is in this case.

More seriously, though, there is the announcement that Katica Janeva herself may try to reduce the pressure against her by testifying. A letter she reportedly sent to Prosecutor General Ljubomir Joveski also asks him to look into the case against her. Janeva claims that the prosecutor Vilma Ruskoska, who is leading the Racket case, is not reporting all the statements up the chain of command to Joveski and is sitting on a statement from Janeva which can shed new light on the case. Not to mention the announcement from the opposition VMRO-DPMNE party that it also has additional evidence against Zaev.

All these frantic new developments, in the few days since Zaev resigned, guarantee that the racketeering scandal will take new and unpredictable turns in the coming weeks.