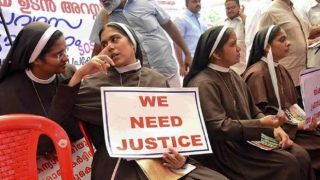 The stories spill out in the sitting rooms of Catholic convents, where portraits of Jesus keep watch and fans spin quietly overhead. They spill out in church meeting halls bathed in fluorescent lights, and over cups of cheap instant coffee in convent kitchens. Always, the stories come haltingly, quietly. Sometimes, the nuns speak at little more than a whisper.

Across India, the nuns talk of priests who pushed into their bedrooms and of priests who pressured them to turn close friendships into sex. They talk about being groped and kissed, of hands pressed against them by men they were raised to believe were representatives of Jesus Christ.

“He was drunk,” said one nun, beginning her story. “You don’t know how to say no,” said another.

At its most grim, the nuns speak of repeated rapes, and of a Catholic hierarchy that did little to protect them.

The Vatican has long been aware of nuns sexually abused by priests and bishops in Asia, Europe, South America and Africa, but it has done very little to stop it, The Associated Press reported last year.

Now, the AP has investigated the situation in a single country — India — and uncovered a decades-long history of nuns enduring sexual abuse from within the church. Nuns described in detail the sexual pressure they endured from priests, and nearly two dozen other people — nuns, former nuns and priests, and others — said they had direct knowledge of such incidents.

Still, the scale of the problem in India remains unclear, cloaked by a powerful culture of silence. Many nuns believe abuse is commonplace, insisting most sisters can at least tell of fending off a priest’s sexual advances. Some believe it is rare. Almost none, though, talk about it readily, and most speak only on the condition they not be identified.

Abused children hospitalized in Bitola, the parents are being investigated