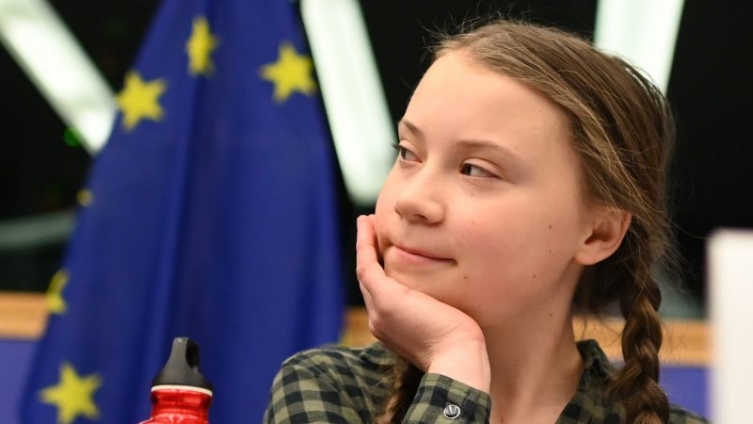 The teenage activist, who inspired a movement of school children to fight against climate change, has urged European leaders to take action in the same way they pledged to rebuild Notre Dame.
Greta Thunberg, 16, choked back tears as she spoke to the European Parliament in Strasbourg after a fire devastated the sacred 850-year-old cathedral in Paris.

Millions have been pledged to rebuild Notre Dame after the blaze moved hungrily across the rooftop and towards its iconic spire. Meanwhile, firefighters, priests and others passed treasures hand-to-hand, trying desperately to outrun the flames.

“Yesterday, the world watched with despair and enormous sorrow how the Notre Dame burnt in Paris,” the Swedish teenager said.

“Some buildings are more than just buildings. But the Notre Dame will be rebuilt.

Last August, Thunberg rode her bike to parliament with a hand-painted “school strike for climate” sign, triggering a wave of weekly school strikes that continue to gain momentum worldwide.

Speaking in parliament on Tuesday, the teenager’s voice shook as she spoke of a “sixth mass extinction rate” that is seeing up to 200 species becoming extinct every day.

“Erosion of fertile topsoil, deforestation of our great forests, toxic air pollution, loss of insects, wildlife, acidification of our oceans — these are disastrous trends being accelerated by a way of life that we here in our fortunate part of the world see as our right to simply carry on,” she said, to rounds of applause.

Ahead of European parliament elections in May, she called out EU leaders for “talking about taxes or Brexit” and failing to take action on climate change.

“I want to make you panic, I want you to act as if your house was on fire,” she said.

“If our house was falling apart our leaders wouldn’t go on like we do today,” she said.

“If our house was falling apart, you wouldn’t hold three emergency Brexit summits and no emergency summit regarding the breakdown of the climate and the environment.”

Referring to the Notre Dame fire, she said it was not too late to act and pleaded for world leaders to “wake up”.

“It will take a far-reaching vision, it will take courage, it will take fierce, fierce determination to act now, to lay the foundations where we may not know all the details about how to shape the ceiling,” she said.

“In other words it will take cathedral thinking. I ask you to please wake up and make changes required possible.”

Notre Dame fire cause may have been electrical

Notre Dame: Fire being treated as accident rather than arson