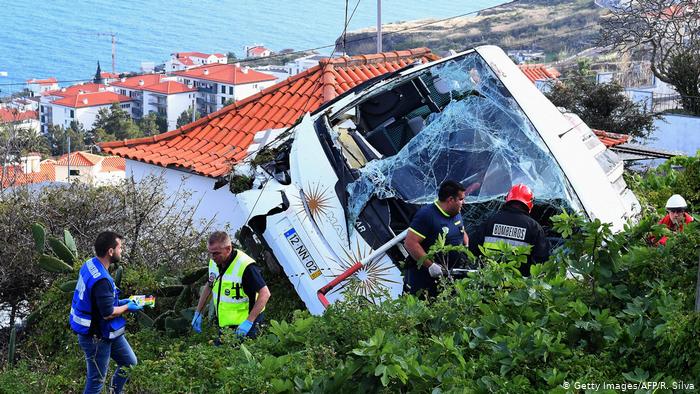 At least 29 people, many of them Germans, were killed on Wednesday when a tourist bus crashed on the Portuguese island of Madeira, local media reported.

The bus plunged down an embankment in the coastal town of Canico east of the local capital Funchal when the driver lost control on a curve. It came to rest between a group of houses.

The cause of the crash was unclear, with local media reporting that a mechanical failure – either a problem with the brakes or a jammed accelerator pedal – were likely to blame. It was not clear exactly how many people were on board.

Portuguese President Marcelo Rebelo de Sousa said he had been told all of the dead were German citizens, though authorities in Germany were unable to confirm this.

Sousa said he planned to speak with his German counterpart Frank-Walter Steinmeier. The German Foreign Ministry meanwhile set up an emergency hotline.

“We are shocked by the tragic bus crash on Madeira,” the ministry tweeted. “Unfortunately we have to assume that Germans are [among the victims].”

“Dreadful news from Madeira,” government spokesman Steffen Seibert added. “We grieve for all of those who lost their lives in the bus crash and our thoughts are with the injured.”

Portuguese Prime Minister Antonio Costa expressed his condolences to the families affected by the accident.

“I have also had the opportunity to convey my condolences to Chancellor Angela Merkel at this difficult time,” Costa wrote on Twitter.

The transport company which owned the bus, SAM, said it was determined to establish the cause of the crash and said it would “fully cooperate” with authorities, according to a statement cited by Portuguese news agency Lusa.

It also expressed its sympathies to the victims. The bus was chartered by the travel agency Travel One.

At least another 28 people were injured including two Portuguese citizens, the hospital in Funchal said.

One passenger died of their injuries in hospital while the driver and the guide accompanying the tourists were injured but survived, according to Canico mayor Filipe Sousa.

Most of the holidaymakers were between 40 and 50 years of age, Lusa reported.

The crash took place at around 6:30 pm (1730 GMT). Videos from the scene showed locals helping the injured to safety, and around two dozen ambulances in attendance.

De Sousa cancelled an initial plan to visit the scene on Wednesday evening after being told that military planes may be needed to transport the injured to hospitals on the mainland, local media reported.

“This is a moment of pain but also of solidarity,” he said, according to broadcaster SIC Noticias.