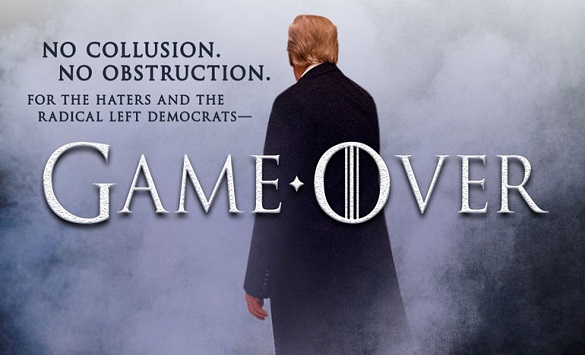 US Attorney General William Barr presented a redacted version of the report prepared by Special Prosecutor Robert Mueller, which concludes that President Donald Trump was not colluding with Russia to win the presidency.

After two years of non-stop investigations, charges filed against some of his top supporters and all-consuming media coverage, Trump now hopes he will be allowed to begin his term in office in earnest, but the Democratic Party and affiliated media outlets are unlikely to move on.

No collusion, no obstruction. For the haters and the radical left Democrats – Game Over, Trump tweeted, using a Game of Thrones style meme.

Thursday’s release of the 448-page report after a 22-month investigation was a watershed moment in Trump’s tumultuous presidency and only further inflamed partisan passions ahead of his 2020 re-election bid in a deeply divided country. Democrats said the report contained disturbing evidence of wrongdoing by Trump that could fuel congressional investigations, but there was no immediate indication they would try to remove him from office through impeachment.

Trump appeared to be in a celebratory mood on Thursday, saying at a White House event with wounded U.S. troops that he was “having a good day” following the report’s release, adding, “It’s called no collusion, no obstruction.” Trump has long described Mueller’s inquiry as a “witch hunt.”

US President Trump declared a national emergency over the coronavirus

Jair Bolsonaro says he was not diagnosed with the coronavirus