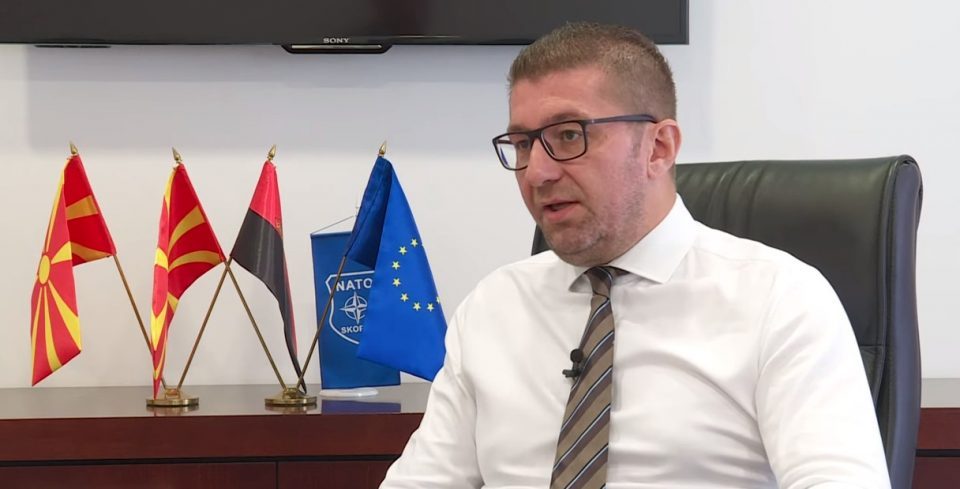 VMRO-DPMNE leader Hristijan Mickoski in an interview for TV Alsat M, said he was disappointed by Zoran Zaev who as prime minister was tricked by the Russian comedians and disclosed important information that high-ranking officials in Europe shared with him, thinking he was in the same company with Poroshenko and Stoltenberg.

I do not have any specific comment but to say that I am disappointed with what I heard and generally I would like to say three sentences. The first is that I am even more disappointed when I saw what the stand-up show organized in the Government when Zoran Zaev tried to clumsily defend himself from what he believed practically yesterday that he was the very good friend with Poroshenko and that there was communication between Stoltenberg, Poroshenko and him. Personally, as a man and as a citizen of this country, it disappointed me.

Mickoski pointed out that the second thing we heard was that practically Zaev as a statesman is not to be trusted to keep important information that high-ranking European statesmen shared with him.

He practically tells, recounts, adds and takes information, and so on, and he does so for two reasons, to make himself important that he is informed, that he is a factor, that this type of information is shared with him and the second thing is the pressure of the meaning of that information, he cannot decide with himself and wants to make it easier on himself and transfer it to the interlocutor, says Mickoski.

There is also a third thing, says Mickoski, and it is that he immediately and without hesitation reaches for crime, for illegal acts.

Without any hesitation, he says: “Yes, yes, in cash.” Then we saw that this money was not intended for bribery but as a donation for the construction of a church, which will end in the depot of the Ecumenical Patriarchate, I presume with Patriarch Bartholomew. I do not know any politicians, or colleagues who currently have 150,000 or 100,000 euros in cash. A piece of friendly advice, let him be separated from the worshipers and those who are around him daily for the purpose of realizing personal selfish interests. Let him be a few hours away, think about what it is doing. The situation in the country is bad, life is bad. What is happening today must end with early parliamentary elections, said Mickoski.

Mickoski said that if Zoran Zaev wishes Macedonia well at all, he should immediately call early parliamentary elections, because the state is heading in the wrong direction.

The situation in the country is bad, life is bad, this way of functioning is wrong, what is happening and what is today’s everyday life must end with early parliamentary elections. It is good not only for him, if he wishes the country well, at least 1% of what he says in the public, he should do so together with the coalition partner DUI, says Mickoski.

He pointed out that this situation is unsustainable and crosses all normal limits of a normal political environment and therefore Zaev should be separated from the worshipers and those who are around him daily for the purpose of realizing personal selfish interests and to think for a few hours about what’s he doing.